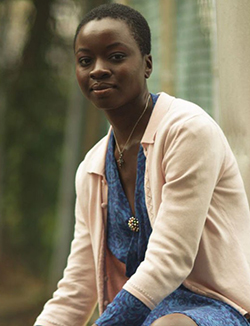 Danai Gurira fights zombies in The Walking Dead. As a playwright, she’s just as fearless. She tells Rosamund Urwin about her ambition to be an African Chekhov

DANAI Gurira often becomes “enraged” when watching dramas about “the African female experience”.
“Sometimes people feel they can write for the African without knowing the African,” the actress and playwright declares. “[Those works] are void of the actual voice, ironically.”
Gurira, who is best known for playing sword-wielding Michonne in zombie Apocalypse series The Walking Dead, was desperate to avoid that in her plays. Eclipsed, which has its London debut at the Gate Theatre later this month, is set during the Liberian civil war.
So the US-born, Zimbabwe-raised 37-year-old travelled there to interview survivors and women who were involved in the conflict. “Though I am African I wouldn’t presume to know the specifics of the Liberian woman without stepping into her terrain and spending time with her.”
Were these women happy to share their stories? “Yeah, which I didn’t expect. They had been through such horrifying things, and I felt I was being invasive… but they would often say they were thankful that a sister from another part of the continent had come to tell their story.”
Only one interviewee was initially angry. The woman’s 10-year-old daughter had been raped to death in front of her. “Her story was something that will never leave me, nor will she,” Gurira says.
“She yelled at me, and I appreciated it: ‘You guys come! CNN comes! They want to hear my story, but what happens next? I get no support’. It was true.” Eventually, though, this woman decided to talk because it helped “to have others embrace the pain”.
Gurira incorporated her experience into Eclipsed and has tried to stay in touch.
Women, I suggest, are often the forgotten victims of conflict. Gurira nods. “My goal is always to give voice to the voiceless, to try to bring out that experience that is under-seen.”
It is hard to imagine a better advocate than Gurira. Her deep voice exudes authority, as do her words: there are no “ums” in her speech, or sentences that tail off.
Broadway run
She wrote Eclipsed in 2007-2008. There are currently discussions for a Broadway run next year. “It’s getting something of a revival, fortunately.” She pauses and bobs her head to the side. “And unfortunately. It’s timely because of Boko Haram.”Advertisement

The main motivating force across her work is to help address the under-representation of African stories on stage and screen.
“When you do bring an African story, it might get ‘niched’ — put in a category that’s ‘other’. As humans, we are dumbing ourselves down. ‘Ye Westerner’ can absorb another people’s story with just as much relish as you do your own.”
She likens her desire to tell African stories to how Chekhov must have felt looking at his contemporaries: “He was just so fascinated by his people — all their issues, flaws and warts. He was probably shaking his head laughing, and decided he had to put them on the page.”
Gurira recalls her childhood in Zimbabwe (her family returned when she was aged five after it was granted independence) as “very multi-cultural and multi-racial”. She went back to the US for university, majoring in social psychology; her honours thesis was about how theatre could be a therapy tool for women of African descent.
When did she decide on acting? “Actually, never. I decided — when I was in South Africa on a semester abroad — that I was going to tell African women’s stories. Then I decided to go to performing arts school to learn the rules — so I knew how to break them.”
Though she performed in her first play, In the Continuum, Gurira no longer casts herself. “A big part of the creative joy is finding women who are astoundingly talented and underrated. I can create a part that will allow them to shine.”
Colour-blind casting
She  also has a not-for-profit organisation in Zimbabwe, Almasi Collaborative Arts, to train actors, writers and directors.
Gurira wants colour-blind casting where it doesn’t undermine the plot.
“With Shakespeare, there’s no reason why Hamlet shouldn’t be Chinese or Lady Macbeth Ghanaian. It was written close to 500 years ago! The idea that we’re still thinking about colour when casting Shakespeare is ridiculous.”
She notes a little improvement. “You look at some amazing TV shows right now, like How to Get Away with Murder with Viola Davis.
“The fact she is black in the show has no relevance, but it’s a part where someone would have traditionally looked at that script and said ‘let’s cast a white woman’ FOR NO REASON.” She shouts the last three words.
Exceptions are times where race is integral to the narrative or where they offer a depiction that is scarce on screen. She feels her Walking Dead character, Michonne, is one such example. Michonne was African-American in Robert Kirkman’s comic book on which the series is based.
“She has dreadlocks and a sword. Black women of that nature are under-represented on television.”

Gurira tells me proudly about all the different Michonne action figures. She clearly adores playing her: “I have this fantastic character who has complexity and a distance to go in terms of who she is and who she could be. That’s an actor’s dream.”
Michonne was almost silent in the early seasons, a stretch — I suggest — for someone as articulate as Gurira.
“Yes, it built up a lot of intensity in my body. It made me step away from myself and find this woman and the wounds that caused her to create a mask of disconnect to the world.”
Many fans of the show want Michonne to become romantically involved with the male protagonist, Rick, played by Andrew Lincoln. They even have a portmanteau nickname: Richonne.
“It makes total sense that [viewers] see something special. They have a very intimate friendship. It is a friendship, however. I have no idea what that evolves into next.” There’s a throaty laugh: “I appreciate that fans want Michonne to get some loving, though.”
Race in England
Gurira is incredibly busy. She is currently writing a pilot for an HBO show. Her most recent stage play, The Convert, was set in Zimbabwe in the 1890s and she hopes to turn it into a trilogy about the country’s identity.
Colonialism has left a strong mark: “There are so many Britishisms in the fabric of Zimbabwean culture. I did O-levels and was taught by ex-pats. [The UK] is the country where my plays have been done the least, but they resonate to a British part of me.”
She’s even tempted to write a play about us. “I’ve always wondered about the experiences of race in England. Where are your people of colour at the top of government?
“This is probably the most multi-racial city I’ve ever seen, and I lived in New York for 10 years. But I just don’t see it reflected in areas like I do in the US. What’s that all about?”
I suggest race may interact with class. “That is another thing I’m fascinated about.
“Zimbabwe and the US are lands of the nouveau riche. The generation upon generation upon generation of wealth is very British.
“I love being here but, as Chevkov did, you just have to take a deep breath and have a good look.”
This article was originally published by the London Evening Standard.