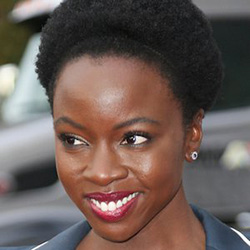 AFENI Shakur was more than just the mother of one of the world’s biggest and, arguably, best, rappers of all time. A leader of the New York chapter of the Black Panthers, she was powerful and influential in her own right. How else does one, while pregnant, successfully defend herself in a 1971 court case, facing a 300-year sentence for allegedly conspiring to bomb department stores and police stations with 20 other Panthers?
Knowing this aspect of Afeni’s story, it is no wonder that her son Tupac Shakur was never one to mince words, always questioning authority and giving voice to his community _ through music, acting and poetry. Because, as the adage goes, behind every great man is an even greater woman.

Playing that woman in the biopic All Eyez on Me — which arrived in theatres Friday, what would’ve been Pac’s 46th birthday — is Danai Gurira. It’s a role she said deepened her love for the rapper she discovered when she was growing up in Zimbabwe.
“I’ve always loved the story of Tupac,” Gurira said, “but the more I got to learn of Afeni, the more I was amazed by her and the relationship with her and her son. How she instilled in him something different than the world around him was saying and made him someone who the world was telling him he wouldn’t be and couldn’t be — all that she could, she did. I loved that, and I loved Tupac more in learning more about her.”
From Afeni’s triumphant legal case to that fateful 1996 drive-by shooting, All Eyez on Me charts the rise and fall of the polarising figure killed at age 25. Titled after the last album Tupac released while alive, the film is being released after nearly 20 years in the making, shepherded by producer L.T. Hutton, a former Death Row Records producer and Tupac confidant.
That two decades has been marked by an Oscar-nominated documentary (Tupac: Resurrection), two multimillion-dollar lawsuits, an ever-evolving roster of writers and directors and a non-committal estate. Oscar-nominated writer-director John Singleton, who directed Tupac in Poetic Justice and was once slated to take on the biopic, publicly criticised Hutton and the film after his departure.Advertisement

Despite the film’s rocky road to production, Gurira was long in mind by those involved to play Afeni. She was approached multiple times through the years before production finally started. For Benny Boom, a former music video director who took on the picture, it was Gurira’s spellbinding performance as Michonne on The Walking Dead that made her ripe for the part.
“Her Walking Dead character, when she is on the screen, it’s always impactful for me,” he said. “That was something I wanted to make sure we had with the Afeni role. I think she needs to be and should be in Oscar consideration; she brought a calibre of acting that we needed to legitimise this movie.”
Jeremy Haft and Eddie Gonzalez, the writing duo who fashioned the final script for the feature, agreed, noting the necessity for someone who could fully embody Afeni’s real-life gravitas. Gurira, a Tony-nominated playwright and noted activist for women’s rights worldwide, was a perfect fit.
“She is such the real deal. You had to get an amazing actress and a strong woman to play a strong woman,” Haft said.
And because “this movie is about how [Tupac] became who he became before those big moments” most people know about — in which his mother was a major influence — Gonzalez said Afeni’s presence throughout is integral to the Tupac story. After all, one of his most notable songs, Dear Mama, was an ode to her.
Ahead of the film’s premiere, Gurira spoke with The Times about Afeni Shakur, who died last year, her love of Tupac and what the world can learn from the woman who raised him.
How did you prepare for the role?
I did everything that I could, a lot of research. I read Jasmine Guy’s book (Afeni Shakur: Evolution of a Revolutionary) and thanked her in person many times for what she did. She did that thing that we need to do more and more as women, women of colour, and people of colour, and that is making sure our stories get written down. The information she got from Afeni was invaluable to knowing about her and her story and the story of a black woman going through that era. I also did a ton of research into the Black Panthers and all these people who don’t get celebrated.
Did you get a chance to meet her before her death?
Unfortunately, I did not, but I tried desperately. I learnt later it was because she was in the last few months of her life.
Was it difficult taking on a role of a real-life woman, especially with a script that didn’t aim to sanitise her complicated life?
In many ways, no. It’s all about the “how” to me and the spirit of the thing. Are you trying to allow a person to be a full human being or are you trying to degrade them? Her life has redemption in it, and storytelling is about that, allowing a story to be complex. To me, it’s actually damaging to try to sanitise a story. If you tell my story one day, let it have all my issues in it. It is deeply important to step into the uncomfortable, because then is when we give it truth. That is my job. Benny and L.T. were very keen on making it something truthful but not disrespectful.
Playing your son was first-timer and Tupac doppelganger Demetrius Shipp Jr. How was that?
I think he was amazing and does an astounding job. I was really impressed with how he was embodying this man, and coming on as a first-time actor, that is no small thing.
Why do you think Tupac and his story are still relevant 21 years after his death?
here was something so powerful growing up in Zimbabwe and seeing the impact of this man across the world, and I saw it when I researched his mother too. It was an era where people spoke what was true, whether or not it was safe to say it. That’s something he got from his mother and the Panthers. That is something very powerful that we need to remember: We need to speak the truth about what’s happening in our societies. What’s scary to me in our world and country is that we’re starting to have an odd relationship with the truth sometimes. There’s an integrity (issue), and facts could be getting compromised if we’re not careful.
After researching and playing Afeni, what have you learnt and are taking with you after this film?
She was a survivor who struggled to bring truth to the life that she embodied. She used her mind powerfully, and I have so much respect for that. I (leave the role) understanding the power of your mind and what you can do, even though the world says you can’t.
Just days ago, the first trailer for Black Panther, in which you star, was released and the world went crazy.
We worked our tails off on that movie and gave it our all. We understood the importance of what we were trying to do, and it was to tell a story on that platform from the African perspective. Growing up as people of colour, I know for me, we didn’t see ourselves in that sort of position pretty much ever. So we understood the importance of it and bringing it in a way that is authentic to Africans as well.
That’s a heavy burden.
It was a lot to carry, and it was an honour too. We put all we had into it. (Director) Ryan Coogler and Marvel and the cast _ it was a gift, and I’m thankful it’s being received as such. Really, it’s for (the fans) and the little kids who need to see brown faces out there doing heroic things.