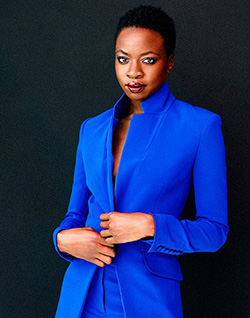 IN The Walking Dead she plays a katana-wielding badass who drags two jawless zombies around an apocalyptic wasteland on a chain.
But it is in real life where Danai Gurira has encountered the most unsettling stuff.
The 37-year-old spoke to DuJour about her play Eclipsed, based on the lives of five women in war-torn Liberia, which is currently running off-Broadway in New York.
“I was enthralled by an image I saw in the New York Times in 2003 of women in the Liberian war right when it was at its climax,” she said.
“There were some women rebel fighters who were getting attention in the Western press because no one had ever seen anything like this.
“I was raised in Africa and I had never seen anything like it, women with AK-47s, dressed very hip and looking formidable. I was keen to one day pursue that story and put it on the stage.”
The actress and playwright was born in Iowa in the US but was raised in Zimbabwe from the age of five, when her parents moved back there after the country gained its independence.
After high school she returned to the US to go to college, but in 2007 she once again headed to Africa, this time to Liberia where she worked with a non-profit organization, and it was there her characters began to take shape.
“I met amazing women who told me unbelievable things,” she said. “They inspired a lot of the characters you see on the stage.”
Although the second Liberian civil war – which claimed the lives of up to 300,000 people – officially ended in 2003, Gurira insisted the atrocities are far from ended, and not just there.
“Unfortunately, these are very current issues,” she said. “And it is appalling that they are very current issues.
“One would think we’d have figured them out by now, but we haven’t and we still live in a world where women are disproportionately victimized, attacked, put into inhumane circumstances and left to feel perpetually unsafe.
“This is a huge global human rights issue that has not been resolved.”
Eclipsed, which stars Oscar-winner Lupita Nyong’o, is currently running in New York’s Public Theatre through November 29,
Meanwhile Gurira’s character Michonne made her return in the season six premiere of The Walking Dead on Monday night.Advertisement