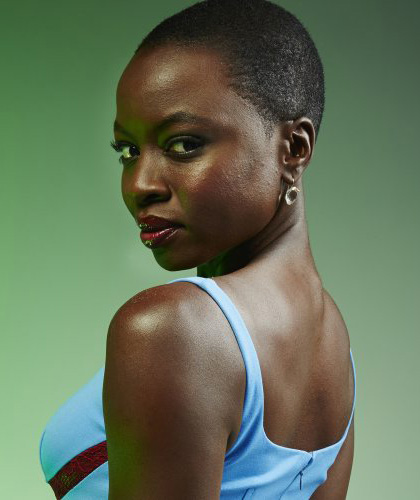 ACTRESS and activist Danai Gurira believes in the power of using her voice to amplify African storytellers.
The set of The Walking Dead is a difficult place to stand out on Halloween: the zombie quotient is high and the makeup artists are two-time Emmy winners, but nobody rocks a katana and dreadlocks better than Danai Gurira in her role as the steely heroine, Michonne.
This year, however, the actress tried something different. On a break from filming the show in Atlanta, Gurira and her female cast mates posed in makeshift versions of jilbabs like those worn by the Nigerian schoolgirls kidnapped by terror group Boko Haram.
Although it was Halloween, the only thing scary about Gurira’s photos was the sad anniversary they marked—exactly 200 days since the girls were taken from their dormitories. On Nov. 2, she tweeted pictures with the caption: “The girls of TWD for the abducted 219 girls of Chibok. We have not forgotten. #BBOG.”
In the months since the kidnapping, the #BringBackOurGirls hashtag has made the rounds—from Diddy and Usher to Anne Hathaway and Michelle Obama. Yet, for Gurira, the photos she posted weren’t just a chance to play dress up or join the celebrity bandwagon. They were acts of solidarity.
“People need to speak from what they’ve learned and not try to speak for others,” she said over tea in mid-November, after wrapping filming of the fifth season of The Walking Dead.
A week before the photo shoot with her fellow actresses, Gurira learned firsthand about the Chibok schoolgirls’ plight when she met one of the girls at a private women’s conference held inside Google’s Washington D.C. offices and organized by Bono’s international anti-poverty lobbying group, ONE.
Sponsored by a nonprofit campaign called the Education After Escape Fund, the brave Nigerian teenager—dressed in a wig, sunglasses and using the pseudonym “Saa”—sat before the crowd and told her personal story about the harrowing hours after her abduction.
Saa talked about how she and a classmate jumped off the back of a pickup truck in the dead of night and after hiding for a day in the bush, they met a shepherd who eventually rescued them and returned her to her parents. Saa is now navigating a new life in America as an incognito boarding school student.Advertisement