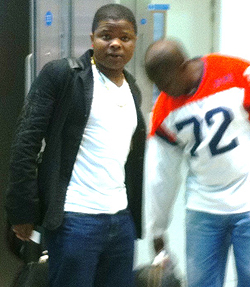 THIS year’s edition of the Durban Summer Fiesta tour promises to be nothing short of explosive as Zimdancehall, urban grooves and hip hop juggernauts Knox Guni, Freeman and Jimmie Maleta, are expected to headline the event.
Dot5ive Enter10ment spokesperson, Terrence “General TK” Kadhau, confirmed that this year`s event will be held on October 27 at Urban Lounge in Durban South Africa.
“I can confirm that Freeman, Nox, and Jimmie Maleta are going to be headlining this year`s Durban Summer Fiesta and they have promised locals nothing short of a top drawer performance,” said Kadhau.
He said the three artists will be supported by Shelly GK, Merciless, Coolly G, Tyfah, Bashment Crew Outer from United Kingdom and DJ Banks.
In separate interviews with New Zimbabwe, the performing artists confirmed their participation and assured their legion of fans that they would bring their A game to what is arguably Durban’s biggest Summer music fiesta
The musicians are expected to offer different dynamics and have something unique to offer listeners of their music.
Affectionately known as the Nox by his following, Enock Guni has the edge of experience on his side and has been in the industry much longer.
As seen many times in showbiz, the tag of being a veteran carries with it the temptation of sitting on one’s laurels and coasting on nostalgia, but Nox’s career completely debunks this narrative.
Over the years, Nox has transformed urban grooves from being a genre with a niche audience to Zimbabwe’s most popular genre.
Despite the influx of new artists, Nox has refused to be swept away by the tides of time and change but has managed to stay relevant through constant re- invention and industry changing sounds.
Such is the extent of Nox’s relevance that at some point he was rated in the same bracket as world renowned urban hip hop finest such as Usher Raymond and Joe Thomas to mention but a few.
With a hit laden discography that spans a decade, colourful theatrical costumes and a crisp live band, Durban fans are in of a treat with Nox.
Not enough can be said about the on-going meteoric rise of hip hop finest Jimmie Maleta whose star keeps getting brighter with each passing day.
Currently riding high on the success of Winner, a collaboration with Tashley of the Chiyzbanks Movement, Maleta`s career is truly a coming of age story.Advertisement

The Chegutu-born artist came onto the scene as a hard core generic rapper who fit the typical mould of spouting aggressive lyrics which mirrored by the tough upbringing in oldest urban settlement.
He achieved notable recognition through songs such as Baby Nah feat Shelly GK and Nguva ndiyoyi.
Like they say experience is the best teacher and with time Maleta metaphorically and literally cleaned up his act and it was no surprise that he shocked the whole music industry with the release of the introspective hit singles I wanna know and Amai.
Revellers at the Durban Summer fiesta show will have a once in a lifetime opportunity to travel this journey with the “hip hop finest” himself.
The HKD boss, Sylvester known as Freeman Chizanga presents an interesting juxtaposition to his fellow Zimdancehall counterparts in that he embraces the celebrity element of being an artist in the spotlight.
Freeman shies away from typical struggle stories that every artist seems to relay and endears himself in love songs that are laced with a party vibe.
This is best typified in what is arguably his biggest song to date “Joina City” “Shaina” which celebrates the beauty of Zimbabwean women.
Fans can look forward to the always immaculately dressed artist to bring the same style and pazzaz to Durban.
Those who align themselves to the HKD family can look forward for new material from Freeman as he recently released a new album titled Top Striker earlier this year.