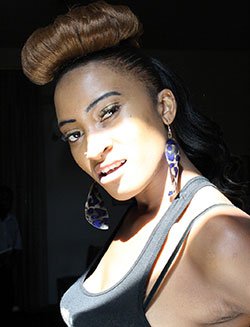 RAUNCHY dancer Beverley Sibanda was the toast of the night in South Africa Thursday when she scooped the Dancehall Queen Award, shrugging off competition from several dancers drawn from across the continent.
For her exploits, Bev as she is affectionately known in showbiz circles walked away, with 25 000 rand (about US$1,700) and was crowned African Storm Dancehall Queen for 2015.
Bev’s manager, Hapaguti Mapimhidze was ecstatic about the pole dancer’s exploits and told New Zimbabwe that it showed that she had talent.
“As the management for Bev we are very excited. This shows that the girl is very talented. The competition was very tight with many girls from across the continent.
“There were over 25 contestants and she outclassed all of them,” he said.
Mapimhidze said they have lined up several celebratory shows across the country.
“I have talked to popular music promoters and they have agreed to line up shows for the girl. Other dancers will also come in to join the celebration,” he said.
Bev has carved her name in the entertainment circles as wild dancer who can perform with virtually anything from poles to bottles.
Her sensual dances have made her a favourite for men who religiously throng her shows.
The mere mention of her name evokes images of wild, sensual, seductive dance antics that have caused many men to reportedly become hot under the collar.
The dancer has a tendency of leaving male patrons drooling and asking for more whenever she takes to the stage.
Bev said she has evolved her dances from being a pole dancer to a “complete professional performer.”
Of late she has developed a penchant of other dance genres.
So versatile is Bev that she can abandon her pole acrobatics to jive to the irresistible sungura beat.
She can also whine her body to dancehall tunes and shake her body to the sounds of rhumba without pain.Advertisement