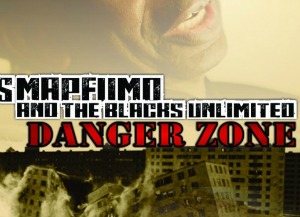 THOUGH he hails from Zimbabwe rather than Jamaica, Thomas Mapfumo is often compared in the West to Bob Marley.
The two shared a bill in 1980, but Mapfumo’s stature is so tremendous in his home country (where he’s called the “Lion of Zimbabwe”) that Marley was made the opener. Aside from their political astuteness, they don’t have much else in common.
Danger Zone, the latest album from Mapfumo and his long time band Blacks Unlimited, seems aimed at changing this. The cover of Danger Zone’s first single, “Music/Shabeen (Remix),” shows a dreadlocked Mapfumo smiling as red, green, and gold colors blaze behind him; the resemblance to classic images of Marley is undeniable.
It’s appropriate, given that a lot of the songs on this album seem geared at a hippie-festival audience. With thick Auto-Tune, pop chord progressions, and a strong reggae pulse, songs like “Danger Zone” and “Are You Ready” almost sound like reggae band Rebelution.
But there’s a difference. The grooves never stop, chugging into the distance like freight trains. This is the Chimurenga at work. Mapfumo invented and popularized that genre, a fusion of rock instrumentation with Zimbabwean mbira music.
Though it’s a pop genre, it’s based on grooves that stretch for well longer than five minutes and often up to ten. The track lengths make the album a commitment but also lend the more pop-oriented songs a hypnotic quality, especially when spaced next to the more classic Mapfumo fare.
Mapfumo’s voice contributes to this greatly as well. He’s a presence of immense power; on “Music,” the backing vocalists clam up when he enters, and it’s chilling. Even Auto-Tune isn’t enough to drown out his gorgeous bass voice, instead warping it into a mournful, almost disorienting sound. But he never sounds stern or serious. Even in the album’s darker moments, he sounds like he’s thoroughly enjoying making the music, ribbing with the backing vocalists and basking in the instrumental arrangements.
And there’s certainly a darkness to this album.
“The world’s on fire/People running in all directions,” he sings on the title track. Mapfumo’s songs are pleas for global sanity, and they’re made all the more powerful given his history.
He’s been on the wrong side of both the colonial British and the current Mugabe regimes of Zimbabwe, the former of whom detained him for his lyrics and the latter of whom harassed him badly enough (though fearful of arresting him due to his stature) to drive him into exile in Eugene, where he’s lived ever since.Advertisement

As such, it’s appropriate that the true gems of this album are tucked at the very end: the twin mbira-oriented pieces “Varimudande” and “Pasi Idandaro.” They’re hushed, haunting, and a breath of fresh air after ten sprawling pop songs.
Though Danger Zone is ostensibly an attempt at capturing an American audience with Jamaican sounds, these tunes are a touching reminder of where his heart lies.