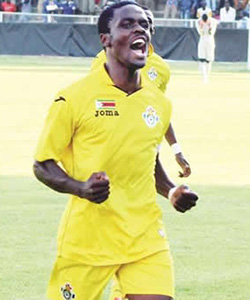 WARRIORS midfielder Danny “Deco” Phiri still basking in the glow of Zimbabwe’s qualification for the African Cup of Nations finals has been handed the arm-band to lead the team at the regional Cosafa tournament to be held in Namibia.
The 14-nation tournament kicks off on Saturday with the Warriors taking on Swaziland in the opening match.
The Warriors left for Namibia on Wednesday and Phiri – one of the heroes that beat Malawi 3-0 to qualify to Gabon for the first time in ten years – said he was ready to take on the challenge of leading the team.
“It’s an honour to be given the responsibility to lead the team. I am going to try to give everything as captain,” said the reigning Soccer Star of the Year shortly before departure.
“A lot is now expected from us after we qualified to the Nations Cup finals.
“Every team will be eager to beat us it will not be easy but we will go there with a positive mind, a winning mentality.”
CAPS United’s Hardlife Zvirekwi, Dynamos duo of defender Elisha Muroiwa and goalkeeper Elisha Muroiwa are some of the players in the squad that will do duty in Namibia.
There is only foreign based player – Jomo Cosmos striker Charlton Mashumba.
The Warriors technical team have also drafted Highlanders midfielder King Nadolo for the first time, and also included veteran forward Obidiah Tarumbwa, Talent Chawapihwa of Harare City and Nqobizitha Masuku.
Coaches had also wanted the likes of William Manondo, Mitchelle Katsvairo, Wisdom Mutasa and Hillary Bakacheza but their clubs could not release the players as they needed them for the domestic league campaign which resumes this weekend.
Zimbabwe and Zambia are the most successful Cosafa teams, having won four titles apiece while Angola and South Africa have won it thrice each.
ZIMBABWE SQUAD:
Goalkeepers: Tatenda Mukuruva, Donovan Bernard
Defenders: Teenage Hadebe, Bruce Kangwa, Farai Madhanhanga, Ronald Pfumbidzai, Hardlife Zvirekwi, Elisha Muroiwa, Blessing Moyo, Lawrence Mhlanga
Midfielders: Danny Phiri, Tatenda Mudehwe, Nqobizitha Masuku, King Nadolo, Raphael Manuvire, Tafadzwa Kutinyu,
Strikers: Talent Chawapihwa, Obidiah Tarumbwa, Charlton MashumbaAdvertisement