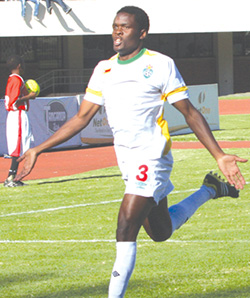 CHICKEN Inn captain Danny “Deco” Phiri is the favourite to win the overall Castle Lager Footballer of the Year Award on Friday night.
The winner of the coveted award, his first and second runner up have been kept a secret after voting on Monday but will be known at a banquet tonight; so will be the coach, goalkeeper and promising young player of the year.
With the power, leadership and influence of Phiri, the Game Cocks won their maiden championship with a game to spare two weeks ago.
And Phiri, appeared to have garnered more votes than any other player during the selection of the 2015 Soccer Stars on Monday by football writers, club captains and coaches.
But there will be competition for the top gong, however, from the likes of Matawu, Dynamos defender Mushure and Highlanders forward Knox Mtizwa who won the Golden Boot Award after finishing the season with 14 goals in 17 starts.
Chicken Inn provided more players than any other club in this year’s Soccer Stars of the Year finalists, with four of their players making it among the 11 outstanding players of the season.
Phiri was joined by goalkeeper, Elvis Chipezeze, fellow midfielder, Clemence Matawu and striker, Edmore Chirambadare on the finalists.
Dynamos provided Ocean Mushure and Tatenda Mukuruva, while Highlanders’ Knox Mutizwa made the cut, to add on to the top goalscorer award, which he won after netting 14 goals.
Stephen Makatuka, who was solid at the back for Caps United all season, striker, Brian Muzondiwa of FC Platinum and Raphael Manuvire, who was the driving force behind ZPC Kariba’s late resurgence, are part of the 11 finalists.
Hillary Bakacheza was the star for Triangle, as they finished fourth on the league table and was deservedly voted as one of the finalist.Advertisement