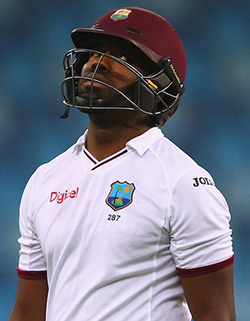 THE West Indies Cricket Board  (WICB) has replaced batsman Darren Bravo in the West Indies squad for the ODI tri-series in Zimbabwe with Jason Mohammed
The announcement came a day after Bravo reacted on Twitter to WICB chairman Dave Cameron’s interview, where he had said Bravo was offered a grade C contract due to his slipping batting average.
“It is explicit that if your averages are not above a certain level it tells you what contracts you get. It is very, very explicit,” Cameron had told SportsMax TV, a Caribbean television network.
“His averages in the last two years have been declining, so what do you do? Reward poor performance or do you encourage him to get better?”
Bravo responded with a tweet saying he had never been offered a Grade-A contract. “You hav been failing 4 d last 4yrs. Y don’t u resign and FYI I’ve neva been given an A contract. Big idiot @davec51,” he tweeted.
A WICB release said Bravo had been “replaced due to inappropriate and unacceptable behaviour, which is contrary to his contractual obligations to the WICB”.
A clause in his “match/tour contract”, the release said, “clearly states not to make any statement in or to any form of media (which shall include, without limitation, print media, television, radio, internet or any social networking media), or any other public statement, which would bring yourself, WICB or any official or authorised representative of WICB or the game of cricket into disrepute, and your agreement to use all such media in a responsible manner.”
Bravo was West Indies’ second-highest run getter in the recently concluded Test series against Pakistan in the UAE.
Before that, he had a poor Test series against India at home, scoring only 139 runs in seven innings. Since November 2014, Bravo scored 1089 runs in 17 Tests for West Indies, a tally that is second to Kraigg Brathwaite’s 1258 runs in 20 matches.
Mohammed had captained West Indies A in their limited-overs series in Sri Lanka last month, scoring a fifty and a hundred in his side’s 3-0 clean sweep. A middle-order batsman, he has played two ODIs for West Indies, the last of which came a year ago, also in Sri Lanka.Advertisement

The WICB release also said offspinner Sunil Narine would be returning home due to personal reasons, and he will be replaced by legspinner Devendra Bishoo.
West Indies had initially named their squad for the series – which also includes Zimbabwe and Sri Lanka – on October 13.
On November 4, they had announced an updated squad, with wicketkeeper-batsman Shane Dowrich and fast bowler Miguel Cummins brought into the 15, replacing experienced batsman Marlon Samuels and teenage fast bowler Alzarri Joseph
West Indies play their first game of the series on November 16, against Sri Lanka, in Harare.