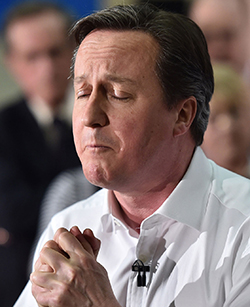 A NEW biography of David Cameron by a former ally turned political enemy contains claims of youthful debauchery by the future British leader, according to extracts published by the Daily Mail on Monday.
Reactions on social media focused on the description of a bizarre initiation ritual for an Oxford University club made by an unnamed contemporary of Cameron’s who is himself a member of parliament.
The lawmaker claimed that the initiation ceremony involved a dead pig and that Cameron “inserted a private part of his anatomy into the animal’s mouth”.
The hashtag #Piggate quickly topped Twitter trending in Britain, with users making many pig-related puns.
Downing Street declined to comment on the claims, which were repeated in other British newspapers.
The book is being published by billionaire Michael Ashcroft, a major donor to Cameron’s Conservative Party who turned against the prime minister when he was not appointed to a senior government role.
Ashcroft, a former deputy chairman and treasurer of the party, admitted that he had been expecting the ministerial appointment following Cameron’s first general election victory in 2010.
The book “Call Me Dave” also claims that Cameron smoked marijuana at university. Asked in the past about any drug-taking in the past the prime minister has said that he had “a normal university experience”.
The Daily Mail said that the biography would “make political waves” but the Guardian’s media columnist Roy Greenslade said that “it is highly doubtful that the book will cause more than a ripple”.
“People are much more likely to view the whole business as poor form by Ashcroft, a case of sour grapes,” Greenslade said.
The Independent said that “perhaps most damaging politically” is the claim by Ashcroft that Cameron knew of his non-domiciled tax status in 2009.
Ashcroft’s status, which meant he did not have to pay British taxes on overseas earnings, caused a major scandal at the time and Cameron’s office said the prime minister had only found out in 2010.Advertisement