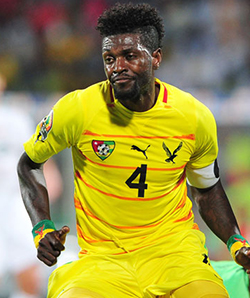 EMMANUEL Adebayor has been likened to “a bad date” by Togo coach Tom Saintfiet, who says he will not select the Tottenham striker.
Saintfiet said Adebayor, 31, failed to respond to a call-up for an African Cup qualifier with Djibouti on 4 September.
In June he threatened to miss the match after being stripped of the captaincy.
Saintfiet said: “If you are dating a woman who does not want to respond positively, then you must look for another woman.”
Adebayor failed to reply to Togo management regarding last week’s game by text message or email, according to Saintfiet.
“For me, it is clear that he is a player who does not want to play for his country anymore,” added Saintfiet.
Adebayor is yet to feature for Spurs this season and has been left out of both their Premier League and Europa League squads.
David De Gea: Man Utd keeper hopes for ‘good fortune’ at club

GOALKEEPER David De Gea says he is “happy” and hoping for “good fortune” as he looks to reclaim his number one spot at Manchester United.
De Gea, 24, has not played for United this season as boss Louis van Gaal felt he could not focus with interest from Real Madrid, who failed to sign him on deadline-day.
He played his first competitive game of the season for Spain against Macedonia in a Euro 2016 qualifier on Tuesday.
“I felt good,” said De Gea.
He added: “I really wanted to play. Now I need to keep working and see if I have some good fortune at my club as well.”
Argentina international Sergio Romero has been in goal for all of United’s games this season.
De Gea had been poised to join Madrid on deadline day but the move collapsed as the necessary paperwork was not submitted in time.
He has since been included in United’s Champions League squad.
De Gea added: “My future will be the same as now: remain calm, keep working and improving. In concrete terms, enjoy my football. I am happy.”
United host Liverpool at Old Trafford in the Premier League in their first game back following the international break, on Saturday.Advertisement