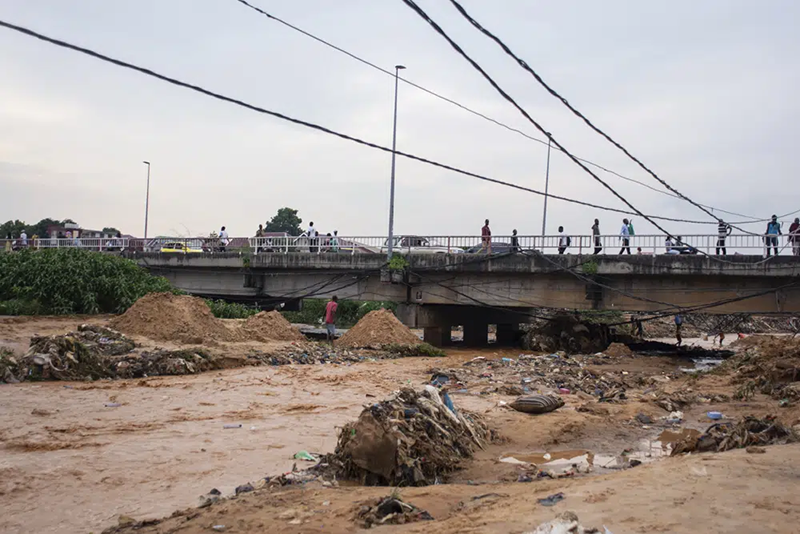 KINSHASA: The number of people killed by widespread floods and landslides in Congo’s capital, Kinshasa, has climbed to more than 140, said the government on Wednesday.

At least 12 others are still missing but the government is not optimistic anyone will be found alive.

“There is no hope of finding survivors,” Minister of Health Lisa Nembalemba told The Associated Press by phone.

The government has announced three days of mourning starting Wednesday.

Some 12 million people live in the 24 neighbourhoods of Kinshasa hit by floods and landslides, which were triggered by heavy rains Monday night. The damage flooded nearly 40,000 houses and flattened nearly 300, said local authorities.

Speaking from the United States where he’s attending the U.S.-Africa summit, Congo’s President Felix Tshisekedi said he felt sorrow when he heard about the damage and called on authorities to speed up recovery efforts.

“(It is up to) the central and provincial governments to accelerate the work of draining rainwater to avoid this type of disaster,” he said. He instructed the government to help the grieving families.

In addition to people losing their lives and their homes, the rains inflicted damage throughout the city. At least one main road into the capital was cut off and much of the city is still submerged in water.

Some residents of Kinshasa say they weren’t surprised by the flooding and deaths, saying the living conditions in those areas are bad.

“It is becoming increasingly urgent that the urban authority seriously focus on major construction in the city to minimize the magnitude of such natural disasters,” said Fridolin Ambongo, Catholic Archbishop of Kinshasa.