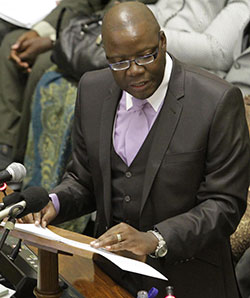 ON TUESDAY, August 20, I said my farewells to the staff at the Ministry of Finance. Zimbabwe’s greatest asset is its people, when they work together as a team for the national good. In that regard, they do not come any better than the men and women in Block B, New Government Complex.
For the last four-and-half years, it was a pleasure to work together with a team oblivious to anything but the good of the country. The higher ground norm of what was purely in the best interest of the nation.
Indeed, over those years we faced humongous challenges, let alone an economy whose inflation stood at 500 billion percent, total collapse of industrial capacity utilisation and revenue collections of a paltry $4 million in January 2009.
We burnt the candle each day and gradually we brought the beast of macroeconomic misalignment to a turnaround. We fought so many battles and navigated so many rapids and waterfalls, so many that a single book might not do justice to an extra-ordinary story of economic engineering under such stress and fragility.
What was key, and perhaps what I learnt, is the obligation of working as a team. A team bound by respect, trust and a common work ethic. Each department knew what it had to do. Each knew the extremely high standards to be maintained. Each knew that any delay or lackadaisicalness would affect the whole.
Above all, one learnt to listen. Each human being, each team member, has something to offer. The ability to listen, digest and analyse was always key. Each also accepted the importance of playing in one’s position. A well-oiled cog.
But in all this, the buck would always stop with the team leader. The team leader had to lead, had to suffer all pain and abuse. He had to be strong and strong headed. Had to inspire, had to be confident, and had to have the vision that would lead all.
And in these years, I learnt one unsavory word that I was not normally accustomed to, the word: ‘No!’ A necessary and essential word in that world where we faced the trilemma of huge demand, high expectations and no fiscal leg room.
So I said goodbye, to a place that had been a home, and to a team that had been family. Goodbye.

Going forward, the debt question is one that will continue haunting this country for a long, long time.

The country’s unvalidated sovereign debt of $10.7 billion is one of the structural binds of the economy. This debt is 103 percent of GDP, of which over 70 percent is accumulated arrears. Zimbabwe defaulted on its international debt obligations way back in 1999.Advertisement

Since then, it has not been able to access cheap credit from international financial institutions and international capital markets. A horrible political status quo over the years has also exacerbated the isolation from international capital markets.
In the face of political and default challenges, Zimbabwe in the last years has not been able to access capital in the form of direct overseas development assistance, foreign direct investment or cheap international credit. Its fiscal diamond has thus been skewered and abnormal.
However, to execute a sustained programme of reconstruction, Zimbabwe has to have access to grant or concessional capital, particularly from the international financial institutions, that is the World Bank, the African Development Bank and others.
The kind of resources needed for gross capital formation which has never happened in this country for pretty much over 40 years is huge. Think of what needs to be done in respect of electricity, water and sanitation, the roads and dams.
A few years ago, the African Development Bank put the cost of Zimbabwe’s infrastructural needs at $14 billion in the outlook period to 2020. Thus, politics and noise aside, Zimbabwe genuinely needs the huge capital stored in these international financial institutions.
It follows that the debt question is not about debt but a development question, about the enclave question and how we move beyond the same. It is precisely because of this that we developed the Zimbabwe Accelerated Arrears Debt and Development Strategy which in May this year resulted in the agreement between Zimbabwe and the IMF for a Staff Monitored Program (SMP).
The agreement of May was arrived after years of internal and external maneuvering and persuasion. In short after a lot of hard, hard work. It is an agreement that is so critical to this country that its integrity and execution should be preserved and honored.
They might not know it but this will be a major, major test.
People, the momentum is gathering pace in frenetic levels of sanitising the grand theft of July 31. We will watch the charades from the sidelines knowing full well that these are desperate antics from desperate people who cheated desperately.
However, self evidently there are desperate attempts to create fear and to emasculate the people. There are threats to arrest everyone including Morgan Tsvangirai. For what?
Little people who major in minors are on the loose. The arch angels of chaos. We are watching them. History is watching them.
They made their move and we make ours, for one thing and one thing alone: the restoration of legitimacy to the motherland. The cracks are there, huge, huge cracks. Watch them deepen. Just watch.
Tendai Biti is the MP for Harare East and MDC-T secretary general. He was Finance Minister between February 2009 and August 2013