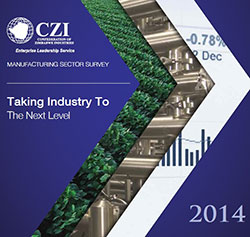 DEINDUSTRIALISATION has reached catastrophic levels with dire consequences for the country’s struggling economy, the Confederation of Zimbabwe Industries (CZI) has warned.
In its 2014 State of the Manufacturing Sector Survey released this week, the industry lobby group said companies in Zimbabwe were under serious threat with capacity utilisation continuing to decline from last year.
“The slow-down being experienced in the economy at large has not spared the manufacturing sector. In 2014, average capacity utilisation continued to decline, shedding 3.3 percentage points to 36.3%,” reads the report.
“Quite telling is the prolonged effects of power cuts and costs, liquidity challenges, low domestic demand and many others on the performance of the manufacturing industry.”
Although the country’s economy was, at the beginning of the year, projected to record strong growth of about 6 percent, the government has since admitted this was not achievable and revised the projection down to 3 percent.
According to the CZI the, “challenges facing the economy are so intertwined that sometimes it is not easy to separate the causes from effects”.
Even so, the main challenges include tight liquidity conditions, company closures, rising formal unemployment; low production levels, non-performing bank loans and disproportionate trade balance.
Says the CZI: “An analysis of these challenges shows that the economy has failed to sustain the strong growth trajectory stimulated by the liberalisation of the foreign exchange system in 2009 after failing to attract critical offshore financial inflows (both foreign direct investment (FDI) and long-term lines of credit).
“These would be critical for replacing the short-term expensive loans that have been granted by local financial institutions since the commencement of the multiple currency system.
“It was the view of the majority of respondents that the current economic environment was not conducive for business.
“The tight liquidity situation has further exacerbated the situation for most companies affecting cash flow positions thus affecting operations. It was the general view that there was need for a shift in policies to ensure investor confidence to drive investment inflows.”
The bleak outlook can however, be turned around by stimulating production through pursuing consistent, transparent and predictable economic policies.Advertisement

“These need to be supported by a bold shift by Government towards reducing the cost of doing business,” said the industry lobby group.
“The private sector must widen its sphere of influence by tapping into regional markets.
“This will bolster industry’s capacity to produce goods and services, thereby stimulating economic growth through exports and employment creation, better tax revenues, and improved liquidity.”
The CZI’s State of the Manufacturing Sector Survey is widely recognised as the country’s leading analysis of the factors affecting business operations and growth, with a particular focus on the manufacturing sector.
The survey not only covers the performance of the manufacturing sector, but also analyses how competitive the sector is and what factors need to be addressed to enhance competitiveness. The competitiveness of industry is influenced by the business environment within which it operates.