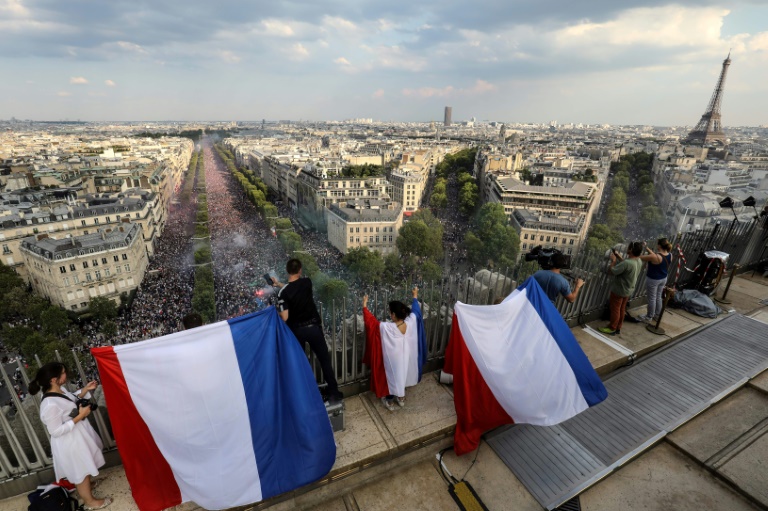 Hundreds of thousands of French fans partied into the night on the Champs Elysees on Sunday to mark the country’s World Cup victory, celebrating football and the power of the game to bring a tense and often fearful nation together.

The country erupted in joy on Sunday after “les Bleus” clinched a 4-2 victory over Croatia in Moscow, with fans streaming into the streets, honking car horns and flying the tricolour flag.

Cheers rang out throughout the country for each of goals in the final, which has transformed the young team into national icons 20 years after the country’s first World Cup triumph.

Even before the final whistle in Moscow, crowds packed the Champs Elysees in central Paris in a repeat of the scenes of 1998 when more than one million people partied there into the early hours.

“1998 was magical! Tonight my son has the chance to experience the same happiness,” Eric Rodenas, 42, told AFP with his son Raphael, who had travelled from France’s south coast to the capital.

As night fell, the dancing and singing continued, with the Arc de Triomphe at the top of the famed boulevard lit up in the blue, white and red of the French flag.

An increase in road accidents, as well as isolated clashes with police and the looting of a store on the Champs Elysees, marred an otherwise joyous occasion attended by people of all backgrounds.

Massive crowds gathered on the Champs Elysees in Paris to celebrate

The festivities will resume Monday when the victorious French squad will parade down the capital’s most famous street at around 5:00 pm (1500 GMT), followed by a reception with President Emmanuel Macron at the Elysee Palace.

“MERCI” the president wrote in a one-word tweet after the match which saw him pictured celebrating wildly in the stands and visiting the players in the changing rooms.

Midfielder Steven N’Zonzi said Macron “had found the right words… He just told us it was huge for the country, for all the young people.”

France’s Journal du Dimanche newspaper rushed out a special edition in Paris hailing a team which has ascended “To the Stars”.

Amid the dancing and singing of the national anthem, some fans paused to savour a moment of unbridled joy and national unity after a difficult period for France.

“We’re a country that’s under too much pressure. Economic, social pressure, there’s too much of it,” Thomas Bazzi, a 31-year-old with the colours of the French flag painted on his cheeks, told AFP.

“We needed this release,” he said, smiling and holding a beer outside a pavement cafe in central Paris as cars streamed past with cheering fans hanging out the windows wrapped in the flag.

Despite the country’s enviable and romanticised lifestyle, its people are regularly found in surveys to be some of the most pessimistic on the planet.

Much of this is down to decades of high unemployment, mounting public debt and the homegrown terror threat, which has led to a series of attacks since 2015 that have claimed nearly 250 lives.

But France’s success on the pitch in Russia has also led to a newfound feeling of togetherness in a country marked by years of often poisonous debate about immigration and French identity.

The national football squad, most of whom are non-white, has provided a tonic after an impeccable performance both on and off the pitch as national ambassadors.

The Arc de Triomphe in Paris is lit up with the blue, white and red of the French flag

“Seeing everyone all together in the street, it’s mad,” Ludovic Guaignant, a technician, told AFP in Paris. “There aren’t any more problems, racism — everyone’s together. You only get that with football.”

His thoughts echoed those of star midfielder Paul Pogba, who like many of the squad hails from an immigrant family in one of the deprived and often overlooked multi-racial suburbs around Paris.

“There are people of many different origins, that’s what makes France so beautiful,” he told a press conference last week.

Such talk has led to inevitable comparisons between the current team and their victorious 1998 “Black, Blanc, Beur” (Black, White, north African) predecessors led by Zinedine Zidane.

The huge crowds across France posed an immediate headache for France’s overworked police. Some 110,000 security forces were deployed over the weekend.

In the Carillon bar in eastern Paris, which was targeted by Islamic State gunmen during the November 2015 terror attacks, some remembered the bloodshed and saw the victory as a reverse of the country’s fortunes.

“Being world champions is symbolic,” Benoit Bardet, a young IT consultant from the area near the St Martin canal, told AFP. “To come here with my friends was a way of remembering and showing that Paris lives on, even after everything that happened.”

Yet the festivities tipped into violence in some cities, with dozens shattering windows at a popular store on the Champs Elysees before grabbing bottles of wine and champagne, some filming themselves with their phones.

One person was seriously injured during a brawl in which he was rammed in the head with a motorcycle helmet, an AFP photographer reported.

Ten people were arrested in Marseille, where two members of the security forces were injured in clashes, a police spokesman said.

In Frouard, a town outside the eastern city of Nancy, a three-year-old boy and two six-year-old girls were seriously injured after being struck by a motorcycle during the celebrations.