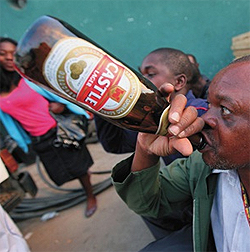 CASH-RICH beverages maker, Delta Corporation, 38 percent owned by SABMiller, said earnings its total revenue for the fourth quarter is down nine percent.
According to the full year trading update, the total beverage volume for the full year is flat on prior year but down six percent for the fourth quarter.
“The sales outturn reflects growth in sorghum beer and alternative beverages and a decline in lager beer and sparkling beverages.”
This is despite getting favourable rates on deposits from the country’s banking sector of between nine to 12 percent, against borrowing rates of eight percent at a time when most companies are enduring high finance costs due on debt and loan repayments.
Being a daily cash business with high volumes, analysts say it was inevitable for the company to receive premiums for deposits made as banks are desperately in need of cash, especially now due to increased withdrawals caused by market uncertainty over the direction of the country’s economy.
Unlike Delta, many companies are failing to make any savings, as they are surviving from “hand to mouth” due to the prevailing liquidity challenges.
“Lager beer volumes were 26 percent below prior year for the quarter and down 18 percent for the full year,” said Delta.
Delta said this reflects both softening demand and the impact of high consumer prices driven by the high levels of excise duties.
“Sparkling beverages are down 13 percent for quarter and two percent for the full year,” said Delta.
This group said this was due to an out of stock situation experienced during the quarter, which was occasioned by an extended water supply disruption at the main factory in Harare.
Generally, people do not have discretionary income to buy lager beer at current prices and Delta will sooner rather than later have to give up margin for volume.
The sorghum beer category continued to perform with volumes up 10 percent in the quarter and 12 percent for the full year with new Chibuku Super contributing 10 percent of the volume.
Alternative Beverages, which comprises Maheu and the new dairy based beverages, are up 11 percent on prior year for the quarter and 33 percent.
Analysts said Delta’s business was ahead in grabbing opportunities arising from the prevailing macro-economic stability. It has been one of the few manufacturers that have managed to attain optimum capacity utilisation after the introduction of the multiple currency system.Advertisement

Essentially, Delta is able to transfer any increase in the cost of production to its consumers without suffering a significant drop in demand.
Delta has also seen a rapid growth in capacity utilisation post dollarisation which can be attributed to a robust business model and constant investment in plant and machinery.