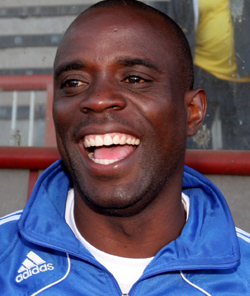 AFTER stuttering to three draws and a loss in their last four matches in all competitions, Dynamos have one more crack at some piece of silverware when they face struggling How Mine in the quarterfinals of the Net One Easycall Cup this weekend.
It all started with the 1-1 league draw against Harare City, followed by another on the same score-line against Flame Lily. Then they lost 2-1 to Harare City in the Chibuku Super Cup final.
Last Sunday, they drew 1-1 against Harare rivals Caps United to remain third in the Castle Premiership race with 48 points, four off second placed FC Platinum and six off leaders Chicken Inn with three games of the season to play.
And unless some miracle happens, they are not in a position to become the only club to win five league titles in a row.
For the first time in four years, Dynamos have had two coaches in one season.
In 2011, Lloyd Mutasa was appointed the head coach but did not last the distance as Dynamos were knocked out of the Caf Champions League by USM Alger of Algeria in the first round.
Kalisto Pasuwa, then Mutasa’s assistant, finished off the year and compensated with winning the domestic league title.
Pasuwa then ruled local football, with no success in Africa, between 2011 and 2014, winning four successive league titles before he left the club last December and was deservedly appointed Warriors coach.
David Mandigora came in at the beginning of the year-a very unpopular choice, and limped on without any direction, until he was sent packing.
Now Tonderayi Ndiraya, the man who replaced Mandigora, has suddenly realised that Dynamos is not a pre-school.
Results are demanded by the executive and the board and, as the most successful club in Zimbabwe with the highest number of followers, by fans as well.
In this November heat, Ndiraya might be thinking the gods have turned against him.
And a loss against How Mine will just confirm he is dabbling in darkness but with three games of the season to go, might just last the distance but he will be the first to know that, he does not belong there anymore despite assurances from club president Keni Mubaiwa that he is ‘very safe’.
Speaking after the 1-1 draw against Caps United, Ndiraya sang the same tune he belted when his charges failed to beat Flame Lily.Advertisement

“We have to keep fighting to the end and see where we end up at the end of the season. It’s game on, but we need to finish in a respectable position. We need to post good results. We will also try and win the Easy Call Cup,” said Ndiraya.
Fixtures
Dynamos vs How Mine, ZPC Kariba vs Chicken Inn, Caps United vs Hwange,
FC Platinum vs Highlanders