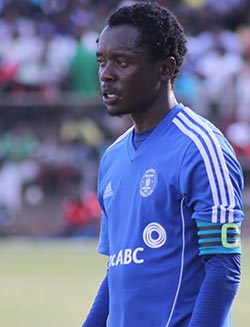 Mochudi Centre Chiefs 1-1 Dynamos
(Dynamos win 4-1 on aggregate)
RONALD Chitiyo struck his first goal in Dynamos colours as the Zimbabwe champions were held to a 1-1 all draw by Mochudi Centre Chiefs at the National Stadium in Gaborone, Botswana on Sunday to qualify for the first round of the Caf Champions League.
But that age old jinx of failing to win away from home in the Champions League continued as substitute Onaletso Tshekiso rammed the ball past George Chigova late in the second half, although that did little to harm Dynamos’s chances to qualifying for the next round.
Dynamos won 4-1 on aggregate after they won 4-0 in the first leg, at the National Sports Stadium last Sunday, through goals from double scorer Washington Pakamisa and Masimba Mambare.
The Harare side Dynamos will now meet AS Vita of the Democratic Republic of Congo who beat Kano Pillars of Nigeria 4-3 on aggregate on Saturday. The first round matches will be played next month.
Newboy Mambare fooled two defenders on the right flank exchanged a pass with Walter Mukanga, received the return pass which he sent to Pakamisa inside the box.
The former Caps United striker then dummied two defenders, leaving Chitiyo to hammer the ball home after 22 minutes of play.
There was nothing much to wrote home about from both sides with Soccer Star if the Year Tawanda Muparati again looking lost in midfield, leaving Chitiyo and Stephen Alimenda at the mercy of Elvis Meleka and Patrick Lenyeletse.
Muparati was later taken out for debutante Tafadzwa Rusike in the dying minutes of the match.
Road to mini league
Dynamos meet AS Vita (DRC) in first round who – beat Kano Pillars 3-1 in DRC but lost 2-1 in Nigeria progressing on a 4-3 aggregate
If Dynamos beat Vita, they face winner between Kaizer Chiefs or Liga Muculmana. Chiefs won 3-0 at home against Black Africa of Namibia and drew 1-1 away to go through on a 4-1 aggregate.
Liga won 1-0 at home and drew 0-0 away against CNAPS of Madagascar going through 1-0 on aggregate.Advertisement