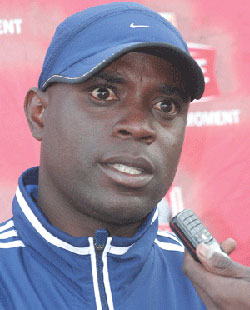 JUST a week after they were handed a 3-1 defeat by FC Platinum in a league encounter at Mandava, Dynamos face the Platinum miners again in the Chibuku Super Cup quarterfinals on Sunday.
According to the PSL, there will be double headers over the weekend with all matches taking place at the National Sports Stadium on Saturday and Sunday.
Chicken Inn take to the field first to take on Chapungu on Saturday before Triangle line up for battle against Harare City later the same day.
On Sunday, ZPC Kariba will take to the field first against How Mine before Dynamos line up against FC Platinum later in the day.
But the spotlight will naturally fall on the match between Dynamos and FC Platinum.
FC Platinum are the defending champions and Dynamos coach Tonderai Ndiraya remains cautious despite his team coming from a morale boosting 5-1 win over Wha Wha in midweek on Wednesday.
“Obviously it is not going to be easy for us because we are facing the defending champions. They are keen to retain this Cup which is currently in their trophy cabinet,” Ndiraya said.
“So, this is a tough draw for us; very tough. But that is what has come out of the draw and we just have to face them.
“As Dynamos we are ready for any team so we are ready to face FC Platinum. We have to fulfil this Cup fixture.
“Maybe our league match against them on Saturday will help us gear up for them.”
With Dynamos still uncertain of defending the league title, they will be determined to win the Chibuku Super Cup title.
The winners of this Cup will represent Zimbabwe in the Caf Confederations Cup next season.
FIXTURES
SATURDAY
13:00 Chicken Inn v Chapungu (National Sports Stadium 1300hrs
15:30 Triangle United v Harare City (National Sports Stadium)
SUNDAY
13:00 ZPC Kariba v How Mine (National Sports Stadium)
15:30 FC Platinum v Dynamos (National Sports Stadium)Advertisement