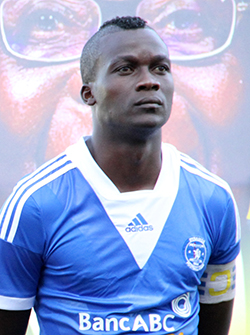 DEFEATED Dynamos have shifted their focus to the Harare derby against bitter rivals Caps United at the weekend.
The Glamour Boys were beaten to the Chibuku Super Cup by bogey side Harare City 2-1 in the final at the National Sports Stadium on Saturday.
Goals from ex Dynamos striker Francesco Zekumbawire and William Manondo killed the game stone dead despite Dynamos scoring a consolation through substitute Richard Kawondera.
With the championship seemingly out of reach, Dynamos had been banking on the Chibuku Super Cup to end the season with some silverware.
However, the defeat to Harare City has reignited their interests in the championship despite having fallen six points behind leaders Chicken Inn.
Chicken Inn lead the standings with 53 points, FC Platinum are on second spot with 49 points while DeMbare are in third with 47 points.
Dynamos captain Augustine Mbara who is back at training after long a lay off due to injury declared on Monday they were now gunning for the championship.
“We have to put behind us the disappointment in the Chibuku Super Cup. We are now focusing on the championship,” he said.
“We have always had a chance and I don’t know why people are already writing us off when there are still four games left. This is football; you never know what will happen.
“All we need is to win our remaining matches of the season and see what happens to other teams. So we need to win against Caps United and other remaining fixtures.”
Caps United were held 1-1 by Triangle at home on Sunday and will be looking to secure maximum points as they bid for a top four finish.
They are on sixth position on the league table with 38 points behind Triangle who are in fourth position with 39 points.
Hwange are fifth with same number of points as Caps because of superior goal difference.
In the reverse fixture Dynamos and Caps shared the spoils in a 1-1 draw with Malawi international defender George Nyirenda scoring first for the Green Machine before Quadr Amin converted from the spot for the equaliser.