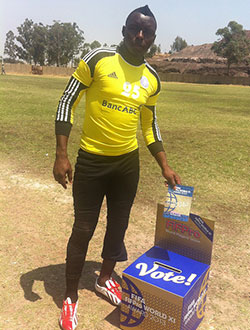 DYNAMOS shot stopper Artwell Mukandi has said he is targeting to keep a clean sheet as the champions host rivals Highlanders in what could be one of local football’s most emotive occasions.
Mukandi has taken over as the number one goalkeeper at the Zimbabwe champions following the departure of George Chigova who left on Thursday to join new club SuperSport United in South Africa.
Mukandi, who had lived in the shadows of the towering Chigova, believes he now has an opportunity to prove himself.
The former Monomotapa stopper, who kept goal for the Harare giants in their 1-0 defeat to Hwange last week, said he hoped to shut out Highlanders strikers on Sunday.
“It will be a tough match against Highlanders. They will obviously be seeking for an outright win but I am confident we can beat them because we are at home,” he said.
“This is also an opportunity for me to show what I can do after the coach showed faith in me since Chigova left. My aim is not to concede a goal on Sunday.”
Dynamos go into the match low on confidence after losing four matches in the eleven they have played so far. They lost to ZPC Kariba, Buffaloes, Chapungu and Hwange recently.
The champions are fifth on the league table and face high flying old enemy Highlanders who sit pretty in second place, at the National Sports Stadium on Sunday.
DeMbare have a huge challenge to prove that they are still a force and that those defeats were grotesque accidents, not the end of a glorious age.
Defender Ocean Mushure said Dynamos were on course to extend their league dominance over Highlanders on Sunday.

We will extend our league dominance over Highlanders … Ocean Mushure