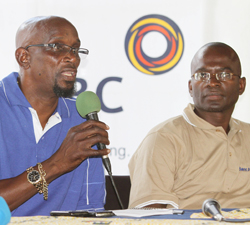 A CASH crisis caught up with champions Dynamos as they have closed their offices until the start of the Premier Soccer League season as they cannot afford to pay workers.
The country’s most successful club does not have offices of their own and rent space at the National Sports Stadium.
According to a reliable Dynamos insider Dembare Dotcoms, the office was shut down two weeks ago and workers are still to be paid.
“The team has, over the past six months, failed to pay the secretariat on time saying the club has no money in its coffers, even during the times when the club made profits from home games,” DeMbare Dotcoms reported Tuesday.
“At the end of last season, Board Member in charge of Finance, Rundaba, told the staff that the team had run dry as it was now in the off season period.
“The staff members were told to report for work two weeks per month from December 2013 till the season starts either in March or April. During this period the staff will be receiving part of their monthly salaries if available.”
Team manager, Richard Chihoro, has been forced to conduct team business in internet cafes as the office is currently closed, while secretary general Webster Chikengezha is doing business from his Nyaradzo offices.
Dynamos, like their adversaries Highlanders, are sponsored by BancABC.
But the Bulawayo giants are better off in terms of assets as they own an office in town, a clubhouse with two sports bars, a camping house in the high density suburb of Luveve and rent a bar from the Bulawayo City Council.
Advertisement