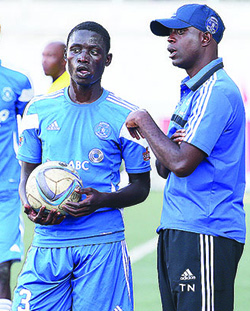 DYNAMOS Coach Tonderai Ndiraya hopes to keep the momentum high for a league and cup double when his charges face Chapungu in the Chibuku Super Cup semi-finals on Sunday at Mandava Stadium in Zvishavane.
The semi-finals will kick-off with ZPC Kariba taking on Harare City on Saturday and both matches will be broadcast live by SuperSport.
After seeing his charges bounce off defending champions FC Platinum in the quarterfinals at the National Sports Stadium two weeks ago and defeating Premiership leaders Chicken Inn last Sunday, Ndiraya is hoping for a good run.
“We have had three good outings after that loss to Platinum. We worked on our mistakes and I am happy that the guys have responded positively to the goals we have set.
“We know Chapungu are not an easy side, but the boys have been growing in confidence in the last two weeks and I hope we will reach the final.
“We don’t want to put ourselves under pressure, we will take it game by game, but I am sure the boys know what is expected of them,” Ndiraya said.
Chapungu coach John Nyikadzino is modest about his team’s chances, saying they are underdogs in the match.
“We are not under any pressure at all. In fact, the bigger club (Dynamos) has the pressure and so we will be underdogs in this match,” he said.
The last time Dynamos were at Mandava they were dazzled 3-1 by Platinum and the last time they were in the Midlands, they lost 1-0 to Chapungu at Ascot in a league match, then under David Mandigora.
Chapungu veteran forward Philip Marufu, Patrick Khumbula, Allan Tavarwisa and Tinei Chitora have all turned out for the boys in blue in the past and will be determined to get one over their former employer.
With striker Rodreck Mutuma having finally broken his drought against Chicken Inn, Chapungu need to be on the lookout as his combination with big Takesure Chjnyama could start to pay dividends at the crucial moment of the season.