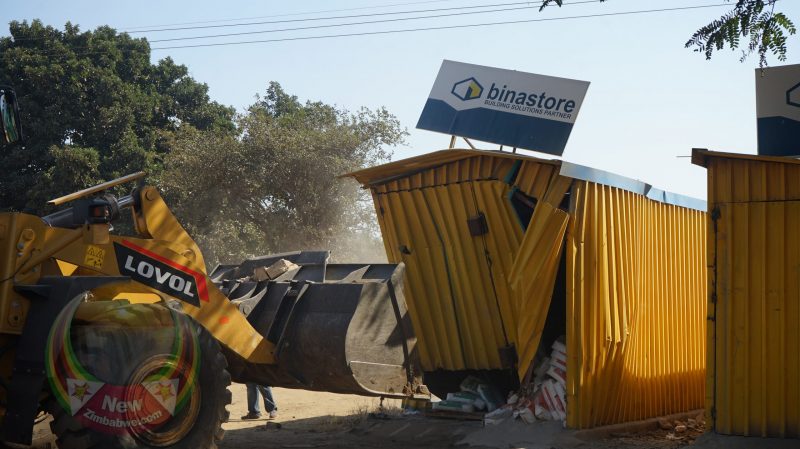 ZIMBABWE Congress of Trade Unions (ZCTU) has slammed what is said was confusion being exhibited by the government over the ongoing demolitions in Harare.

According to the labour body, senior government officials, including ministers, have since the start of the demolitions last June, been issuing out contradictory statements, raising concerns there was serious policy discord in state corridors.

However, according to the ZCTU secretary-general Japhet Moyo, the government once allowed informal traders to operate freely as it encouraged the growth of the sector.

However, it was quick to condemn the the current demolitions taking place mainly in Harare adding they were reminiscent of the infamous 2005 Murambatsvina thousands of people lost their homes and businesses.

“The current destruction of the informal sector is reminiscent of the ‘Operation Restore Order’ of 2005/6 that left, over 700 000 people stranded. Previously the government encouraged the growth of the informal sector and allowed informal traders and vendors to carry out their activities. The authorities largely turned a blind eye to vendors and traders operating in violation of by-laws,” the top ZCTU official said in a statement.

Moyo questioned the rationale behind the destruction of structures that houses thousands of vendors without providing them with any alternative operating sites.

Most Zimbabweans are surviving on vending after the closure of a large number of companies in recent years.

Moyo also blamed the government for its mismanagement of the economy in its pursuit for political power as a factor behind the emergence of the informal sector.

However, he warned that destroying the informal sector would have serious detrimental economic effects at a time the country’s economy is already in a “parlous state.”

“The timing and magnitude of the ‘clean-up’ operation have led to much speculation as to whether there are in actuality other reasons than those officially proclaimed. For instance, some have argued that the campaign is to punish urban people for voting for the opposition.

“Others say that it is a pre-emptive strike against the urban poor to prevent unrest in the towns by driving people away into the countryside. There are problems with each of these speculations,” said Moyo.

He also said the demolitions, the government would like to turn around and be seen as a messiah pretending to be caring authorities the same victims with shelter.

However, Moyo reminded the government that the destruction of people’s markets violated a whole range of international human rights norms and conventions, including fundamental rights provisions enshrined in the country’s Constitution.

He urged the government to instead formulate public-led policies.

“The continuous heinous act of destroying people’s livelihoods should be condemned by all right-minded citizens. As labour, we stand firm in solidarity with the displaced informal economy traders,” added Moyo.