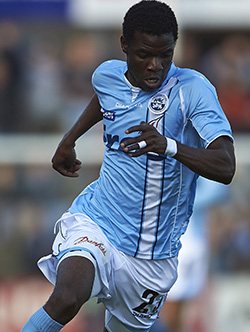 DENMARK based forward Silas Songani joined the Warriors camp as replacement for injured Nyasha Mushekwi ahead of the showdown against the Flames of Malawi at Kamuzu Stadium in Blantyre on Saturday.
The arrival of Songani came as good news to coach Kalisto Pasuwa who lost in-form Sweden-based striker Mushekwi through injury.
The Warriors gaffer had been trying to rope in Supersport United striker Kingston Nkatha but he eventually settled for Songani who arrived in the country on Tuesday following the conclusion of the league programme in Denmark.
Songani who plays his club football for topflight league side SonderjyskE, immediately declared they were looking for nothing short of victory in Malawi.
“I have been in Denmark and have been around since Tuesday,” he said.
“I was called yesterday (Wednesday) to come into camp and am 100 percent confident we will get all three points in Malawi. It will not be easy but we have a good team, all we need is to be focused on the job at hand.
“I have no problem with my fitness, our league ended last week and I think I am in great shape and am looking forward to the game.”
However, Pasuwa expressed concern over the fitness of some of the foreign-based players the majority of whom last played more than a month ago.