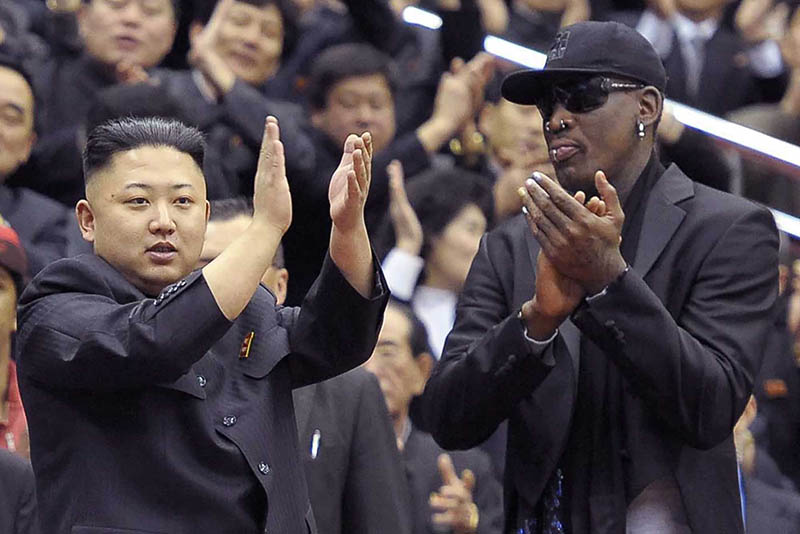 Flamboyant former US basketball star Dennis Rodman has said he will fly to Singapore to support his “friends” Donald Trump and Kim Jong Un at their historic peace summit on Tuesday.

His tweet came after the White House Thursday ruled out any role for the high-profile retired player in the hotly-anticipated talks with the North Korean leader, with whom Rodman has struck up an unlikely friendship.

Rodman has made five trips to Pyongyang since Kim took power and once called him his “friend for life.”

“Thanks to my loyal sponsors from @potcoin and my team at @Prince_Mrketing, I will be flying to Singapore for the historical Summit,” the former Chicago Bulls forward tweeted late Friday.

“I’ll give whatever support is needed to my friends, @realDonaldTrump and Marshall Kim Jong Un.”

The message included a photo montage of Rodman standing between Kim and Trump, who is giving a thumbs-up. The US and North Korean flags appear in the background, and the trio stand above the word “UNITE” in large capital letters.

In a subsequent tweet Rodman wrote: “To all Americans and the rest of the world I’m honored to call @POTUS a friend. He’s one of the best negotiators of all time and I’m looking forward to him adding to his historic success at the Singapore Summit.”

That tweet included a picture in which the basketball star stands next to a broadly smiling Trump.

The White House had earlier shot down any suggestion that the five-time NBA champion Rodman would be present for the negotiations.

Rodman “is great on the court but negotiations should be left to those who are good at it… Trump is the best,” White House spokesman Hogan Gidley told Fox News on Thursday.

Gidley said he expected Trump and Kim to have “an amazing conversation without Dennis Rodman in tow.”

Trump confirmed that Rodman would not be attending the summit, as he met with visiting Japanese Prime Minister Shinzo Abe.

“I like him. He’s a nice guy. No, he was not invited,” Trump told reporters.

After the summit was first announced in March, Rodman said on Twitter he had “great respect” for both men.

Rodman first visited North Korea in 2013 with members of the Harlem Globetrotters basketball team, and in 2014 put together a team of North Korean basketball players for an exhibition match marking Kim’s birthday.

His last trip was in June 2017 when he gave Kim a copy of Trump’s best-selling book, “The Art of the Deal.”