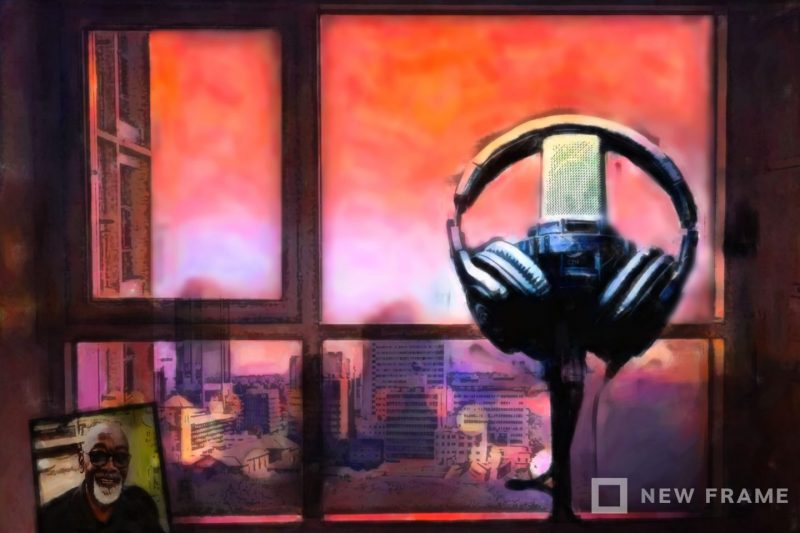 IN A tribute to the late radio deejay, Percy Zvomuya considers the contributions of Bob Marley, Thomas Mapfumo and Wilson to the country’s Zimdancehall and popular culture.

When Zimbabwe’s popular culture historians sit down one day to determine the biggest influences on the Zimdancehall reggae subgenre, it will be difficult to discount the contribution of three figures: reggae legend Bob Marley, Chimurenga maestro Thomas Mapfumo and Dennis Wilson, the Black British telecommunications engineer-turned-radio deejay who died in Harare on 6 January at the age of 66.

The story of how Marley, the key figure in that triumvirate, ended up in Zimbabwe is well documented. But a few rudimentary facts about his journey to Zimbabwe need repeating, if only because they illuminate much about the contributions of Wilson and Mapfumo.

Before The Wailers came to play at Zimbabwe’s independence celebrations in 1980 – at Marley’s expense – his music wasn’t well known in the country, which was engulfed in war, a liberation struggle. It was Marley’s compatriots who were better known: according to educator, scholar and musician Fred Zindi, artists such as Desmond Dekker, Jimmy Cliff and America’s Johnny Nash.

During Marley’s tour in Zimbabwe – between playing for the free Zimbabwe “massive and crew” and sampling the local marijuana varieties – he met Zindi. “You must teach them people to love my music, man. The people standing there like stoogies,” Marley complained to Zindi. In a proselytising move, the reggae star gave some of his records to Mike Mhundwa, a local radio deejay, to play on his show.

Record company Zimbabwe Music Corporation then signed a deal to distribute Marley’s records in the country. In the months and years that followed, it sold hundreds of thousands of them. That one of his records, the 1979 album Survival, had a song with the title Zimbabwe helped endear the Jamaican superstar to residents. “So reggae then caught on,” said Zindi in 2018.

Mapfumo was one of the acts who performed at the 1980 independence ceremony. Judging by his 1985 five-track album Chimurenga for Justice, with the reggae song Mugarandega, he wasn’t only there to perform but also to learn from Marley and the growth of digital Jamaican dancehall, known as diji in the local parlance.

Mapfumo was ever versatile on this song (in the 1960s, he made his name doing covers of Western bands before he started composing his own music). He had two musicians of Jamaican origin who lent the song a certain authenticity. The two West Indians were drummer Munya Brown, who would later be the mainstay of Zimbabwean reggae band Transit, and Dennis Augustine on keyboards. Yet, crucially, Mapfumo asked a Zimbabwean, his backing vocalist Tobias Areketa, to do the dancehall-style chanting.

Mapfumo could have asked Brown or Augustine or any of the members of Misty in Roots, a British reggae band of West Indian origin that moved to Zimbabwe in those early years, to do the chants. Any of them would have it done more naturally, which is to say better, than Areketa.

In that creative decision, in which Mapfumo could have gone for an easy choice but made an unconventional one, one sees the faint outlines of Zimdancehall. It is one of the reasons I consider the Chimurenga man to be the godfather of Zimdancehall.

Mugarandega was also issued as a maxi single with a dub version on side two. When Mapfumo released the hit reggae song Corruption in 1988, in which he decries the pervasiveness of graft in Zimbabwe, it also came with a dub version.

Later, on the album Chimurenga 98, by which time the dancehall chanting had become more sophisticated and attempts to do some of it in Shona had begun, he collaborated with DJ Yuppie Banton on the song Set the People Free.

While Mapfumo and Marley’s roles in Zimbabwe’s reggae have been written about extensively, Wilson’s contribution hasn’t been properly documented. Although it was as a radio deejay on what was then called Radio 3, on which Wilson made his name, the man had moved to Zimbabwe in 1983 to take up an engineer’s job at the then state telecommunications parastatal, Posts and Telecommunications (PTC). Even then, he had lingered for long before taking up the deejay gig.

Wilson’s relationship with Zimbabwe began prosaically enough, skirting the grand narratives of a diasporic West Indian man returning home to the motherland after suffering tribulations in Babylon. His then wife was a sibling of the wife of Obadiah Moyo, a health professional and sometimes deejay who later became the minister of health in Emmerson Mnangagwa’s Cabinet.

Wilson, who was born in Jamaica and grew up in London, visited Zimbabwe a couple of times after independence. At the encouragement of his friend Moyo, Wilson settled in Zimbabwe when he applied for and was offered a job at the PTC. “I am fortunate to be one of those people in the diaspora who managed to come back, managed to come back in a positive way. Whatever I do, I don’t forget that I am fortunate. When I left the UK, I didn’t look at what I would lose but what I gained by coming,” he said in 2016.

When I asked him how important Marley’s concert in Zimbabwe was for the Caribbean community in the United Kingdom, he said the independence show wasn’t a major event there. “It was shown on the news. But reggae in the UK isn’t as big as it is in France. But it wasn’t as big as people imagined. It was bigger here than out there. News like that isn’t news that benefits Europe.”

His decision to relocate to Zimbabwe in particular met with a fair bit of bewilderment. Wilson’s friends and relatives in the UK never viewed him as someone who would go back to Africa, as he never spoke about relocating to the continent, heeding the African proto-nationalist Marcus Garvey’s mantra to go back and help build the motherland.

“Perhaps people in the Americas don’t view Zimbabwe in the same way they view Ghana. They are not aware that slavery reached this far south. And because of that, they are more into West Africa. A lot of people ask me, ‘Why Zimbabwe?’ And I ask them, ‘Why not?’ I don’t know where I come from, I don’t know where my ancestors come from and the way I feel sometimes, I think they [came from] here. Nobody can say.”

His connection to Africa was questioned and then affirmed in a touching encounter. On a visit to Moyo’s rural area, Wilson met an old man who, unaware that he was of West Indian origin, asked him what his totem was. In confusion, he looked at Moyo: “Totem? What is that?” Moyo explained that a totem is a primeval stamp of identity among the Shona and other tribes in Zimbabwe that usually involves the whole clan considering an animal, part of an animal, sometimes even a river, sacred and therefore not to be eaten.

(Marriage of people of the same totem is forbidden. Among people of a certain generation, after greetings, the question that invariably follows is, “Ko mutupo ndiyani? What is your totem?”) When Wilson told the elder that he didn’t have a totem, the old man laughed and said, “Don’t worry, you can have my totem.” “That made me feel so accepted … it meant so much to me.”

Wilson’s entry into deejaying was as fortuitous as his decision to relocate to Zimbabwe. He was at a party with Moyo and radio announcer Josh Makawa when the head of Radio 3, Ishmael Kadungure, heard him play. Impressed by his selection of records, Kadungure invited him to come and play but Wilson didn’t take up the offer. The two met again months later at another party and Kadungure asked Wilson, “But I thought I invited you. Why didn’t you come?”

After another invitation, Wilson played on Radio 3 on Thursday and Saturday nights. “The rest is history.” The signature introductory tune to his shows was Freddie McGregor’s hit single Push Comes To Shove. It was a self-promotion exercise, as Wilson owned the rights to the song in Zimbabwe, he said.

When he got on the radio, he found out that many Zimbabwean people listened more to the riddim than the lyrics. “I used to say to them, ‘Listen to the words. A lot of reggae music, dancehall even, is telling a story.’” People would respond with “I didn’t realise that” when they eventually got reggae’s advocacy of social justice and other issues.

In 1993, when I started listening to him, the radio shows had become totemic. Wilson’s show was compelling listening, an invaluable bridge across the Black Atlantic. He used his Caribbean heritage and West Indian networks in London and Kingston to source hot singles and albums before anyone else around had them.

In the days before the internet, these connections were important. And because he eschewed the nightclub circuit, preferring radio, he brought contemporary Kingston culture into the homes of a multitude of Zimbabwean youths who continue to revere him.

It is this culture, which Wilson helped birth, that helped Zimbabwe develop its competitive sound system culture, some of them run by Jamaicans. No doubt, the leading sound system of those years was Stereo One International, run by Jah B, a Jamaican reggae man who had moved to Zimbabwe. It was the sound system culture that laid the foundations for Zimdancehall.

“What I like, what they are doing is they have taken the music and made it their own,” said Wilson, referring to how most of the songs are in Shona. “They have made it to suit the market here, the people here. Perhaps before they didn’t understand everything, but when they put their own language, people identify more.”

Wilson quit his day job and national radio in 1994 and went back to the UK to study sociology. In the intervening years, he had become a music promoter (he brought Joseph “Culture” Hill, Eric Donaldson and Ijahman Levi to a sold-out, all-night show in 1989), and he played at his compatriot Jah B’s shows a few times.

When I sat down to talk to him, Wilson was considering going back into deejaying, no doubt because of the incompetence and “slackness” he saw on Zimbabwean radio and in popular culture. “Sometimes you listen to the radio and you hear the shit they play. They have no idea, they have no clue. It’s like they go there for the money and not for the passion. They don’t do research. They don’t know the music, and they don’t want to know the music.

They listen to artists who come over here, the artists who come here feel they have to portray Jamaica in the light of swearing, ganja-smoking, blah blah, which it isn’t, and I get disgusted.” He told me that one touring Jamaican artist had used words like “bomboclaat” and “rasclaat”, vulgar epithets that refer to sanitary pads. “This is an insult to every female in your family and around.”

Some years before his death, Wilson was already contemplating his mortality. When asked where Jah B was buried, he said somewhere in Harare, probably at Warren Hills, a cemetery outside the city that is sometimes affectionately known as the Sunshine City. “I don’t wanna go anywhere either. [I want to be buried] right here. I am just grateful to be in a lucky position to come here and be accepted. I am not going to that cold place.” He was buried at Warren Hills, according to his wishes.

If ever there is anyone who deserves to be buried under the glare of Harare’s eternal sun, it is Dennis Wilson, deejay and sound teacher. Without him and those legendary sessions, the youth of many Zimbabweans would have been spent between studying Shakespeare and living in the bland society imposed by the Black Victorian schoolmaster, Robert Mugabe, completely oblivious of the sonic our long-lost relatives conjured as they crossed the big river.