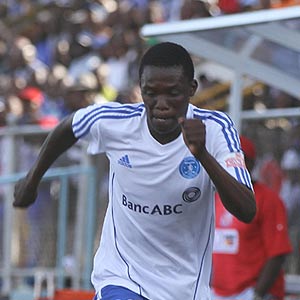 FORMER Dynamos and Zimbabwe’s 2012 Soccer Star of the Year midfielder Denver Mukamba has joined newly promoted South African Premiership side Jomo Cosmos as he continues his search for more game time.
Jomo Cosmos announced the signing of the 22-year-old Mukamba from Bidvest Wits on their website.
“Ezenkosi have acquired the services of Zimbabwean attacking midfielder, Denver Mukamba.
“The former Dynamos player had returned to his club Bidvest Wits after a fine session at Tuks where he made 11 league starts in 18 appearances,” the club stated.
Mukamba spent last season on loan at University of Pretoria, and reports had suggested that Tuks were determined to have him permanently, but were put off by Bidvest’s asking price.
The Zimbabwean international joined Bidvest in 2013 after a stellar season at Dynamos where he was voted the country’s best local player, but he could not replicate the same form, and after one season, he was shipped off to University of Pretoria where had started to show some glimpses of his former self.
Mukamba will join up with his fellow countryman Charlton Mashumba, who is back at Cosmos after attending trials in Portugal.
Mashumba played a key role in Cosmos’ promotion to the Premiership scoring 19 goals leading to interest from South African and oversea clubs.Advertisement