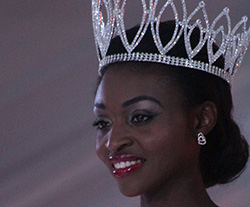 EMILY Kachote, who was embarrassingly deposed as Miss Zimbabwe after nude pictures of her were leaked to the media, is now working on a documentary meant to educate and inspire young women.
Kachote hogged the limelight after she was dethroned as Miss Zimbabwe 2015 barely a month into her reign by the Miss Zimbabwe Trust.
NewZimbabwe.com caught up with model in the capital, Harare last week. And unbowed, Emily again denied ever posing nude and lambasted the Miss Trust for being corrupt and misleading.
Kachote however, indicated that she moved on and put to bed a past that left her public image with a dent.
She is now working on a documentary meant to inspire young women and girls on how to be role models and fighting stereotyping.
The leggy model also reiterated that the documentary would be instrumental in reviving her faltering career.
“I am working on a documentary to educate and inspire other girls on how to look up to themselves as role models, no matter what happens in their lives.
“I want to motivate young girls and teach them to fight for their dreams and to be independent,” she said.
Despite taking a battering from the public scandal, Kachote still believes can resuscitate her modelling career.
“I have taken the Miss Zimbabwe Trust to court,” she said.
“I just hope the issue will be over soon because I still have a lot of work to do and want to take my modelling career to greater heights.”
She was not reluctant to remind her peers that abiding to certain individualistic principles is key to being successful in the cutthroat industry.
“You have to be led by principles in life to be a successful model; you cannot fall for anything less,” she said.
Failure to observe these principles is recipe to disaster, she warned.
“You are not in a battle with anyone, so you just need to do what is right. And success will knock on your door.”
Regarding the nude images and video which went viral on social media, Kachote insisted the girl posing nude was not her, adding that the Miss Zimbabwe Trust has no evidence to prove its charges.
“I never posed nude. The Trust absolutely has no evidence to prove this and very soon I will be cleared of these charges and start all over again,” she said.
Kachote said she has faced stereotyping due to the scandal but is ready to fight a problem that continues to adversely impact the lives of many young girls and women.Advertisement

“Stereotyping should stop! People associate nude pictures with loose morals and continue to devalue women. This is what I aim to fight through my documentary,” she said.
Kachote conceded that it would be a difficult fight.
“It is hard to fight for myself as a victim and I have been pinned down because of my passion.
“But I continue to explore these issues freely as I refuse to be manipulated by certain individuals or elements that will only kill my ambition.”
The model said she has found a new love in fashion to keep herself away from the negativity.
“I am loving fashion and aspire to be a complete package of the fashionista that I am and I want to see myself as a better image consultant,” Kachote revealed.