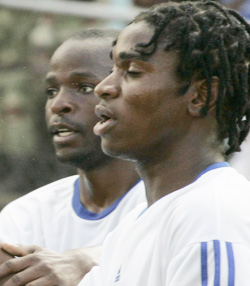 FORMER champions Dynamos have received a major boost ahead of the 76th edition of the Harare derby against bitter rivals Caps United at Rufaro Stadium on Sunday after agreeing a two year deal with former striker Evans Gwekwerere.
So desperate is Dynamos that they want to register the player so that he can play a part in the big match.
Gwekwerere, a former Dynamos hit man, would be making a welcome return to a club that gave him fame and a little fortune.
He has been playing his club football in Mozambique, turning out for top outfit Ferroviario De Maputo.
He left the country three years ago after a stint with city rivals Caps United.
Gwekwerere also had a stint with South African premiership side Moroka Swallows.
His handler Frank Bokosha confirmed the player had agreed terms with his former club and was now awaiting his clearance from his previous club in Mozambique.
“He has signed a two year contract. The coach was impressed by his performance and believes he could be the solution to their goal scoring problems. We are now just waiting for his work permit.  Once his papers are in order, he can play but it will all depend on the coaches,” he said.
Dynamos coach Jorge Silva is under pressure to win three matches in a row to save his job after he was given an ultimatum by the Dynamos executive to collect nine points.
He has already cleared the first hurdle after overcoming newly promoted Mutare City 2-1 this past weekend.
And now he has to beat high flying Caps United who are yet to lose a PSL match this year and a stumble on Sunday could seal his fate.
However, Dynamos will be looking to maintain their dominance over the Green Machine who last beat them in the league 2-0 way back in 2009.
Advertisement