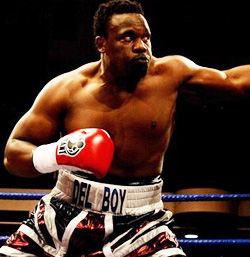 AFTER heavyweight world title challenger Dereck Chisora took a frightful beating from British countryman Tyson Fury in their November world title elimination fight (as well as for the European title), many thought Chisora would retire.
But Zimbabwe-born Chisora said he never even thought about it.
“British boxing needs me back,” said Chisora, long one of boxing’s most entertaining trash talkers.
“Retire? How old do you think I am? I’m just 31, just starting out. I never announced my retirement. I’ve a long, long time left.”
Chisora, who went the distance in a loss in a 2012 world title fight with Vitali Klitschko, returns after an eight-month lay-off since that 10th-round knockout loss to Fury.
He faces Beqa Lobjanidze at the SSE Wembley Arena in London on the undercard of British super middleweight Frank Buglioni against Mexico’s Fernando Castaneda.
Believable or not, Chisora gave his version of what went wrong against Fury.
“Look, Tyson thumbed me in the first round, then thumbed me in the third round. My eye closed and I couldn’t see,” Chisora said.
“Trust me, in time, Tyson and me are gonna bump it again. ‘Del Boy’s’ a long way from finished.
“My goals now are exactly the same as they were when I first started out as a pro — to be in great fights against other great fighters.
“I’m an entertainer. I deliver the fans what they want. I create a jolly!”
Chisora said he spent a lot of the last eight months training.
“I’ve passed most of the last eight months at the gym, training, training, training, man, getting ready to come back,” said the boxer.
“I’ve got a new setup, a new trainer in Gary Innes. I’ve got my mojo back and I’ve been learning lots of great new stuff. I can’t wait to demonstrate my skills to the public.”Advertisement