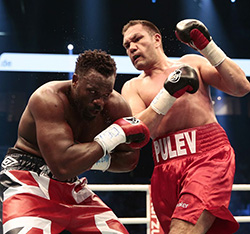 DERECK Chisora’s hopes of getting a shot at Anthony Joshua’s world title were crushed by Kubrat Pulev over 12 tough rounds in Hamburg.
‘Del Boy’ was the underdog going into the showdown and lost as expected but strangely scored decision that saw him lose the IBF eliminator and miss out on the vacant European title.
The scores of 116-112 and 118-110 in Pulev’s favour at least meant that the 115-113 in Chisora’s favour was as big a consolation as having his foe-turned-friend Tyson Fury supporting him at ringside.
Pulev (23-1-KO12) was one of many whose rise to the top of the heavyweight division was halted by Wladimir Klitschko, but the 35-year-old is back on track.
Chisora (25-7-KO17) suffered the same fate as he did against Vitali Klitschko but despite his efforts to try and spring a Fury-style surprise out in Germany, it looks like he will head back to the domestic scene.
He started off on the front foot, going for the body and landing a nice overhead right before referee Manuel Oliver Palomo started to keep a close eye on his approach.
The ducking in and aiming low saw the Finchley fighter get told off twice but Pulev managed to fire out a big warning, countering him with a left and then a hard right as he tried to duck out of danger.
Chisora was then caught by a frightening uppercut in the third but he did respond with a looping right which missed by a millimetre.
Pulev, in fact, seemed to jab at will and every time he threw his right, he followed it up by clinging on to ‘Del Boy’, who at 17st 3lbs and his lightest weight for years, was trying to escape but to no avail – or help from the referee.
The fourth saw him trapped on the ropes, but he was clearly trying to draw Pulev into his shorter range. The Bulgarian was smart and experienced enough to stay out of trouble, his longer reach still dominating the round.
When Chisora did sneak in he showed he still had shots to choose from and the fifth saw him at his sharpest while the sixth was arguably his best of the night.
A clash of heads opened up a cut over Pulev’s left eye, which earned more boos from the German crowd and seemed to upset the ‘home’ fighter.
It was still hard to see how ‘Del Boy’ was going to turn the tables, though, and as the fight entered the final third he seemed to be taking a backward step, happy to be close to the ropes and perhaps trying to get Pulev to waste some of his superior energy.Advertisement

The same pattern continued into the eighth – Pulev was happy to hold on if he couldn’t keep him at range, with referee Palomo refusing to punish the Bulgarian’s tactics.
Chisora and ringside supporter Fury both spoke to the man in the middle, while a looping right from range and a rare left-right-left combination showed that ‘Del Boy’ was far from done.
The ninth and 10th were probably his best two rounds with the overhead right still his best hope and by the 11th Pulev was only jabbing. But given the amount of punches Pulev had landed from the start, the result was only going one way.