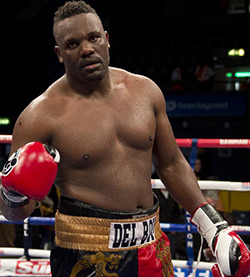 FIERY heavyweight Dereck Chisora landed himself in more trouble after he hurled a table at a press conference to promote Saturday’s bitter British title fight with Dillian Whyte.
The 32-year-old Zimbabwe-born Chisora, who earned himself a ban for his behaviour before and after a world title fight with Vitali Klitschko in 2012, lost his cool after a slew of insults were exchanged and Whyte said he would kill him.
Chisora and Whyte’s unappetising promotion for the bout — which is on the undercard of Anthony Joshua’s world heavyweight title defence against Eric Molina in Manchester — comes a week after an old foe of Chisora’s, David Haye, threw a punch at fellow Briton and WBC cruiserweight champion Tony Bellew in a press conference to promote their fight.
Robert Smith, general secretary of the British Boxing Board of Control (BBBC), said there would be consequences for Chisora’s behaviour.
“There will be action taken and I am in the process of dealing with it now,” said Smith.
Organisers had originally said they would hold separate press conferences after Chisora and Whyte had to be pulled apart in a television program promoting the bout.
Chisora’s previous run-in with the BBBC came in 2012 when they withdrew his licence to box after he slapped Klitschko at their weigh-in for the world title bout in Munich and spat water in the face of his opponent’s brother, Wladimir.
Chisora brawled with Haye at the post-bout press conference after they exchanged insults.