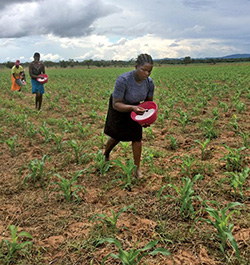 THE distance from the snowy peaks of Davos to a corn farm in Zimbabwe isn’t measured only in miles: They’re centuries apart in economic development. Bridging decades quickly is the impetus behind Blue Marble Microinsurance, a plan to offer crop indemnity insurance to farmers in sub-Saharan Africa.
Unveiled in 2015 at the World Economic Forum, the initiative to sell small farmers inexpensive policies to reimburse them in the event of a weather disaster was started in November with a pilot involving 335 maize growers in Zimbabwe.
Blue Marble is an eight-member group that brings together industry giants such as American International Group, XL Group, and Zurich Insurance Group. The insurers hope the project helps them learn how to do good in the process of doing well, creating new customers for their products.
“We’re trying to leverage their expertise in a very different kind of market,” says Joan Lamm-Tennant, Blue Marble’s chief executive officer. “It’s not a project that’s going to pay off in the first year.”
Africa has about 60 percent of the world’s uncultivated farmland and more farmers as a share of the population than any other continent. Yet countries such as Zimbabwe have struggled to marshal the necessary resources to unlock their agricultural potential.
Gains in one area, such as better seed, are often stymied by deficits in others—not enough grain silos. Getting smaller farmers plugged into credit networks would help spur investment and bring new producers to markets, says Ulrich Hess, a senior adviser to Deutsche Gesellschaft für Internationale Zusammenarbeit, a global development group based in Bonn. That’s where crop insurance comes in.
Policies that help farmers hedge against drought and other risks are controversial in the U.S., where they’re associated with bloated federal subsidies to growers prosperous enough to do without government aid.
Programs in developing countries are less ambitious, but perhaps more essential, because they guarantee a farmer will receive some basic income even if weather doesn’t cooperate. Banks then may feel more comfortable lending to them.
In developing countries, policies often take the form of so-called index insurance plans, in which payouts are based on predetermined rainfall levels or other metrics. That keeps overhead costs low and makes the policies simple to understand.Advertisement

Almost 200 million farmers are insured in Asia, and more than 3.3 million in Latin America, according to a 2015 study by the Global Partnership for Financial Inclusion. In Africa, only about 650,000 are insured.
One reason Africa lags other regions is that weather data needed to craft sound policies are scarce. In the Blue Marble pilot, policies are offered only to farmers of corn, a crop with a well-established harvest history. Also, the group isn’t pitching policies to the poorest of the poor—farmers living on $1 a day, a traditional poverty measure. “We’re looking for ones making $8, $9, $10 a day,” Lamm-Tennant says.
The immediate goal isn’t to make money, but to figure out what works before scaling up. “You have to be able to pivot and redesign until you get it right,” she says. That’s why they’re starting small, distributing policies through an organization rather than selling them individually.
But scaling up is what derails crop insurance programs in Africa, says Peter Hazell, a food-security consultant with the World Bank, which has collaborated with governments in Kenya and elsewhere to design crop indemnity policies.
Without public subsidies to drive down costs, it’s hard to persuade farmers to buy coverage. And even if the cost is manageable, many opt for more traditional ways of limiting risks, such as growing diverse crops that mature at different times and need varying levels of rainfall, he says. “The big challenge is: How do you deliver it effectively at a low cost, and how do you make it common among farmers?”
If Blue Marble can reach those farms—and over time give them the financial footing to become bigger—the long-term payoff for its members would be large. Says Lamm-Tennant: “If you do this right, the middle class emerges that then becomes the consumer” of the insurers’ other products.