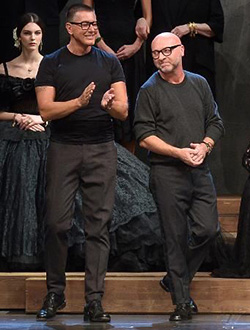 ITALIAN designers Dolce and Gabbana on Monday accused Elton John of being authoritarian, ignorant and hypocritical as a celebrity-driven row over IVF babies and gay adoption showed no sign of abating.
John, 67, stirred up a storm when he called for a boycott of the designer label in reaction to an interview in which Domenico Dolce referred to babies conceived through IVF as “synthetic”.
In Instagram comments that have been endorsed by celebrities including Victoria Beckham, Ricky Martin, Sharon Stone, Courtney Love and Martina Navratilova, the gay star accused the Italian duo of “wagging your judgemental little fingers at IVF.”
He added: “Your archaic thinking is out of step with the times, just like your fashions. I shall never wear Dolce and Gabbana ever again. #BoycottDolceGabbana.”
The hashtag was the top trending one on Twitter in Britain on Monday and in the top three in Italy, with most posts highly critical of the Italian duo.
The designers, who are also gay and were in a long-term relationship with each other until 2005, claimed it was John who was being judgmental, not them.