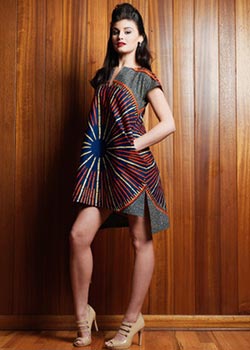 YOUR summer wardrobe just got a little cooler thanks to up-and-coming line, NeoBantu. Blending together classic feminine shapes with vibrant African prints, designer Tendai Tawonezvi is producing pieces that reflect and celebrate your individuality.
She sources handmade African fabrics to inspire and fabricate her designs, all of which are done either out of a showroom in the Underground of South Side on Lamar or at a space in East Dallas. Each piece created is as unique as the print it embodies.
“We are not all alike, and our clothes should allow us to express [that]”, Tawonezvi says.
Growing up in Zimbabwe, Tawonezvi got her first taste of fashion.
While flipping through magazines with her mom and sister, they would find designs that they liked and either her mom would make them, or as they got older, they would take their designs to a seamstress and have them made.
It was during that time that Tawonezvi began to develop an aesthetic that was all her own.
“I really enjoyed the process of finding something I liked, finding fabrics that spoke to me, and taking my designs to someone who could really sew and work with them to construct my ideas.
“There was a lot of going back and forth and redesigning, because, let’s be honest, I had no idea what I was doing as a teenager! There were a lot of absolute disasters!”
But if you knew Tawonezvi before NeoBantu, you might have never guessed that she had secret passion for fashion.
Because, her “real” job is not that glamorous: She’s a pharmacist.
“I came to Texas for school and work, and ended up pursuing a career here. But after a few years of being a pharmacist, I found that something was missing. I felt like there was some other avenue that I wanted to explore.”
For about a year, Tawonezvi found herself extremely stressed out and unsure of how to channel the excess energy she had. But as luck would have it, and as how things tend to happen in Dallas, since it really is a small town, she met budding fashion designer Ruqaiya Johnson.
Johnson, just back in Dallas after attending school at the Fashion Institute of Technology and Politecnico di Milano, and working for Jason Wu, was itching to branch out and start her own independent line.
Their paths crossed and the two began sketching ideas and found a natural synergy between their two thoughts.
That was almost two years ago, and now, Tawonezvi has launched NeoBantu.Advertisement

With the help of her mentor Marion Marshall – whose 20-year history in fashion makes her a valuable consultant – and assistance from Johnson and Fadzi Tawonezvi, who provides merchandising and retailing expertise, NeoBantu is moving in a positive and productive direction, starting with their successful Kickstarter campaign at the end of 2013.
Having just come back from a summer in Africa, Tawonezvi was ready to start her newest endeavour, but like with most projects, she needed a way to jump-start it financially, and she needed to build interest. Enter Kickstarter and their lovely integration with social media.
“I was really hesitant, but I was also at a point that I was really frustrated … I was eager to go … I knew I had to do something, but I was worried about asking for donations with it being the holiday season.
“But I was like, it’s now or never, I wanted to close out the year with my foot in the door.”
The campaign was successful, and the funding went toward their first production.
Everything in their showroom at South Side on Lamar was made because of the money they raised, and everything was a breath of fresh air compared with the pastels and florals running rampant this spring.
It’s colour, that’s for sure, but in shapes and patterns that are truly unfamiliar, because if you dare to call them tribal, you’re just missing the point.
The patterns, yes, are sourced from Africa, and they are traditional designs, but the graphics are more reminiscent of graffiti, watercolours and stained-glass windows than anything else.
“Being of African heritage and being African, I wanted to work with materials and patterns that represented me, but would also translate to someone who didn’t necessary recognize them …
“I also wanted to re-examine the prints of my childhood, because growing up, I couldn’t see myself wearing a lot of the patterns and designs that were around, so now, I wanted to rethink how to play with them,” Tawonezvi says.
She was looking to find her own voice in the conversation of her culture, and to find an appreciation for the life she left behind when she moved to America.
Fashion held the answer, and rediscovering how to blend her American culture with her African culture to develop a sense of identity and individuality has led her to produce a line of eight pieces, from dresses to jumpsuits to skirts and jackets and pants, that utilize prints that are so distinct that you can truly call them your own when you’re wearing them.
Which is the point of NeoBantu’s merchandising concept: Everything is made in small quantities so that the wearer is receiving an exclusive design. You have a one-of-a-kind look, and since the fabrics are handmade, each dress or pant or romper is unique even if it’s made out of the same print.
But what’s even higher on NeoBantu’s mission wish list is to provide the best fit they can.
“The way something fits is very important. And we work to make sure every customer is receiving a dress tailor made to their bodies,” Tawonezvi says.
This article was originally published by the Dallas Observer