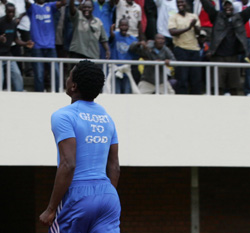 TROUBLED Harare giants Dynamos have turned to former striker, Evans Gwekwerere, as they seek to get the much needed goals following a five match winless streak.
Dynamos have endured a miserable run since the start of the season, failing to score a single goal in all the five matches they have played.
The lack of goals has been cited as the problem the Harare giants are facing right now with their forward line led by Rodreck Mutuma appearing blunt.
The situation has not been helped by the departure of veteran striker, Takesure Chinyama, who had a training ground bust up with coach Paulo George Silva before returning to Poland where he has found a new home.
And the arrival of Gwekwerere who also had a stint with bitter city rivals Caps United having also played for Moroka Swallows in South Africa is seen as a direct replacement for Chinyama. Gwekwerere trained with the Harare giants in the afternoon training session at Hellenics Sports Club on Thursday.
Gwekwerere, who has been playing for a Mozambican club, said he was looking forward to the challenge of playing for Dynamos again. He, however, said he had lost match fitness and would need to work hard to regain his former self.
“It is good to be back. It is a great feeling. All I need is to get my fitness level back to where it should be and see what happens from there. I don’t want to say much at the moment,” said Gwekwerere.
This should come as good news for Silva who has been given an ultimatum to win all the upcoming three matches against Mutare City on Sunday followed by the Harare derby against Caps United and then Hwange. Failure to collect nine points will see him fired.Advertisement