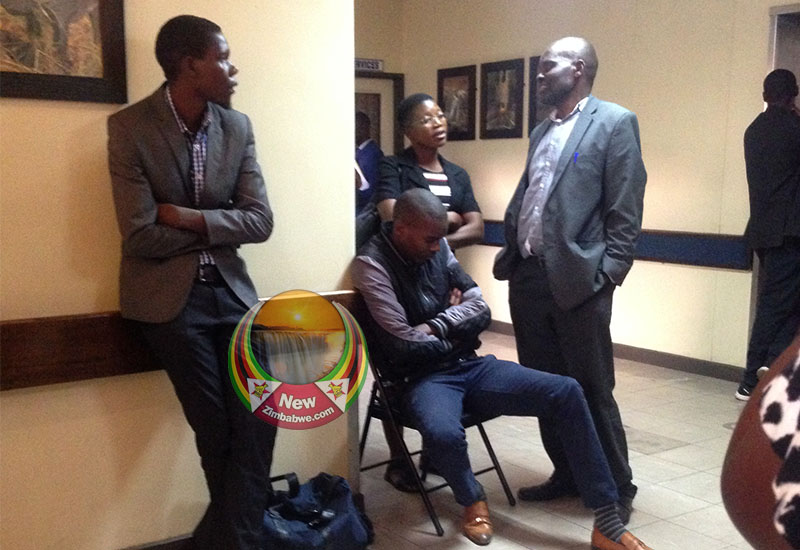 DETAINED doctors’ union leader Peter Magombeyi was assaulted on his hospital bed and in the corridor by a mysterious police officer only identified as Constable S. Zvinogona as he unsuccessfully tried to make his way out Tuesday afternoon.

Zvinogona, who initially refused to identify himself for over an hour before the intervention of a senior officer and a host of lawyers from the Zimbabwe Lawyers for Human Rights (ZLHR), was not known by any of the 16 officers who besieged the floor where Magombeyi was admitted.

The mysterious figure caused an injury on Magombeyi’s arm that was hurt during his alleged abduction, landed blows to his back and could have fractured his neck, according to lawyers.

His father, Kingstone Magombeyi confirmed this.

“I saw it. I was there. It happened when we were making efforts to have him discharged.

“The person refused to identify himself. He is not the one who I was given by the police and what troubled me was who this was since I also saw the message he received on August 28 saying he (Peter) will be taken away by a whirlwind,” said the senior Magombeyi.

The police defied a High Court order compelling them to let Magombeyi leave for South Africa for further treatment.

Their actions saw the 26-year-old who was supposed to leave the same evening being readmitted.

Police spokesperson Senior Assistant Commissioner Paul Nyathi professed ignorance over any such action by the police while those on the ground maintained that they were following orders “from the top”.

“I am not even aware of what you are talking about. Maybe if you could check with me tomorrow,” Nyathi said of the police preventing Magombeyi from leaving.

Added Magombeyi’s father: “I am more worried about this person who has refused to have my son go for further treatment. Peter is just representing other workers.”

According to the Zimbabwe Hospital Doctors Association (ZHDA), Magombeyi’s liver is worsening because of suspected poisoning by his captors.

“High Court has ordered the police to release Dr Peter Magombeyi to go and seek medical attention out of the country. In an attempt to leave the hospital, he was blocked by the brutal police, being harassed and punched. IS THAT PROVIDING SECURITY? It was drama…

“Now he is under hospital arrest at Avenues Clinic, missed his flight whilst his LFTs continue to deteriorate from the suspected poison from perpetrators. He needs your assistance,” the ZHDA said in a statement late Tuesday.

Magombeyi made headlines in the past week after he was allegedly abducted by suspected State agents in Harare’s Budiriro suburb on September 14 before being dumped just outside Harare five days later.