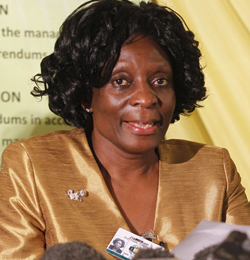 A FUDGE RECIPE: DETERMINING AND DECLARING THE RESULT OF ZIMBABWE’S 2013 PRESIDENTIAL ELECTION
AFTER the March 29, 2008, Zimbabwe elections, the populace eagerly awaited the result of the crucial presidential election. Although the Electoral Act then did not stipulate any period within which the results had to be released, the Act did require that each step of the tabulation process was to be completed expeditiously, deploying phrases and words such as “immediately thereafter”, “without delay” and “forthwith”.
Advancing various excuses believed by few, these provisions were ignored by the Zimbabwe Electoral Commission, which took a full 33 days to release the result. Many believed that the intervening period was used to doctor the results, to bring the total votes of MDC-T President, Morgan Tsvangirai, below the 50% plus one vote threshold required to avoid a run-off poll.
Ignoring the time limits set in the Electoral Act (21 days), ZEC set the poll for a further two months hence. The June 28, 2008, poll date allowed sufficient time for the electorate to be cowed in a wave of endemic violence of such brutality that Tsvangirai was compelled to withdraw from the poll.
There was no possibility of the result being credible, and it was not.
With the wisdom gleaned from this experience, there was an attempt to reconsider, streamline, refine and tighten the law relating to the tabulation and declaration of results. However, the precipitous proclamation of the election dates left the attempts half baked.
The amendments to the Electoral Act and Electoral Regulations were drawn in haste without proper consideration and care. As a result, the very area of the legislation it was sought to improve, in fact became further confused due to the incomplete drafting process. The legislation thus is ill-conceived in part and contains numerous omissions and contradictions pertaining to process of tabulation and the declaration of the result of the all important presidential election.
In the category of the ill-conceived falls an amendment to the Electoral Act which requires that the result of the presidential election must be released within five days. The provision is meaningless, if not worse than useless – though it may provide a false sense of security for some.Advertisement