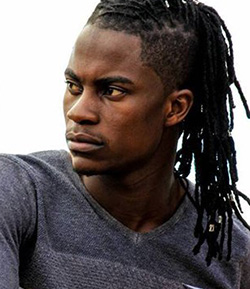 SEXY Angles leader and pole dancer Beverly Sibanda, popularly known as Bev, has revealed that she is two months pregnant after an affair with Dhelira singer, Kudzai Andrew Ngwenya.
However, Ngwenya – better known as Andy Muridzo – has dismissed the pregnancy claim while admitting he had an affair with Bev sometime last year.
Bev surprised many when she told a Harare tabloid that she had unprotected sex with Muridzo.
“Yes, I am pregnant and its two months; I started feeling awkward and decided to do the tests,” Bev told the tabloid.
Contacted for comment, Muridzo admitted having an affair with the pole dancer but dismissed the pregnancy claims.
“You know, when you are a rising star, you met a lot of temptations and on Bev I failed to conquer enticement,” Muridzo told NewZimbabwe.com
“I have also seen that it all started when I joined the Military Touch and I can see all this is meant to derail my musical progress.
“I want to apologise to the Muridzo family and to my wife about the Bev issue once again and would like to thank them for their support.”
The Dhelira hit-maker went on to say that the affair was now in the past adding he was now focussed on his music and his family.
Controversy-prone Bev has previously been linked with a string of soccer stars, musicians and church leaders.
In 2013 she made the headlines after claiming she was in love with Zimbabwe Warriors star Khama Billiat who however, denied the allegation.
Other footballers also caught in the Bev web include former Dynamos goal-minder George Chigova and Patrick Khumbula.
In 2014 Bev was again the in media claiming that Prophetic Deliverance Ministry (PHD) founder Walter Magaya wanted to marry her but she turned down the proposal.
In the same her she also announced that she was dating Young Igwe Peter Moyo – son of the late popular sungura singer Tongai Moyo.
And last year she was at it again when she said a Frenchman she met on social media was heading to Zimbabwe to meet her.
Advertisement