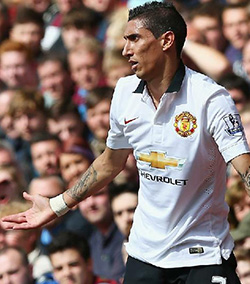 MANCHESTER United’s Angel Di Maria has spoken about leaving Real Madrid, contradicting club president Florentino Perez’s claims that he had requested a move.
Di Maria joined Manchester United for a British record £59.7m fee following an acrimonious row with Perez, who claimed the Argentine had rejected a contract and wanted wage parity with Cristiano Ronaldo.
But AS reports that Di Maria thinks he was given the impression Los Blancos were willing to let him go – and that he never wanted to leave the club.
“I heard what (Perez) said. To earn what Cristiano does I’d have to win the Ballon d’Or,” he said.
“I never said I wanted to leave Madrid. I never wanted to. During the World Cup I thought only of the World Cup and I don’t know where things said in Spanish papers came from.
“Whatever they say, they got €75m for me which is very good for the economy of Real Madrid. They got back what they spent.
“Nobody said anything to me or my representative about staying so we thought Madrid wanted to sell. Before the World Cup there was no offer from Madrid.
“We never asked for €8m. [My agent] stayed in Madrid. The difference in negotiation was €1m. I never had much to do with Florentino. When I signed my contract renewal he wasn’t even there.”
Di Maria also claimed that Madrid asked him not to play for Argentina in the World Cup final and he was willing to ignore the request before he was ruled out through injury.
“When I got the letter I ripped it up. I didn’t speak to anyone from the club. I didn’t care. Eventually [Alejandro] Sabella made the decision and it was for the best.”Advertisement