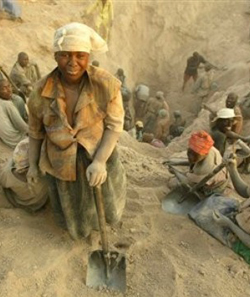 Former diamond mining firms which operated in Chiadzwa before the consolidation exercise by government last year destroyed close to 100 000 hectares of land, an executive has said.
The companies which include Anjin Investments, Mbada Diamonds, Jinan, Diamond Mining Company, Kusena and Marange Resources operated in Marange before they were kicked out by President Robert Mugabe administration for failing to account for revenue collected and for gems mined.
Close to $15 billion worth of gems disappeared from Marange diamond fields, according to President Mugabe.
Zimbabwe Consolidation Diamond Company (ZCDC) Chief Executive Officer, Morris Mpofu, said the company inherited the problem after the amalgamation and have set aside close to $20 million for land reclamation exercise.

“The companies left large tracts of land with gullies, uprooted trees and potholes as they focused on alluvial mining and we have set aside $20 million for the exercise,” said Mpofu while addressing delegates in Vumba.
He said they have started working on 20 hectares with close to 900 trees planted so far.
“We are expecting to plant close to 2 000 trees by March this year. We are working with the Forestry Commission of Zimbabwe in this exercise,” said Mpofu.
He said the reclamation exercise will enable villagers to use the land for other purposes.
Recently, villages expressed concern over the land degradation, accusing the companies of siphoning resources from their communities with ploughing back.Advertisement