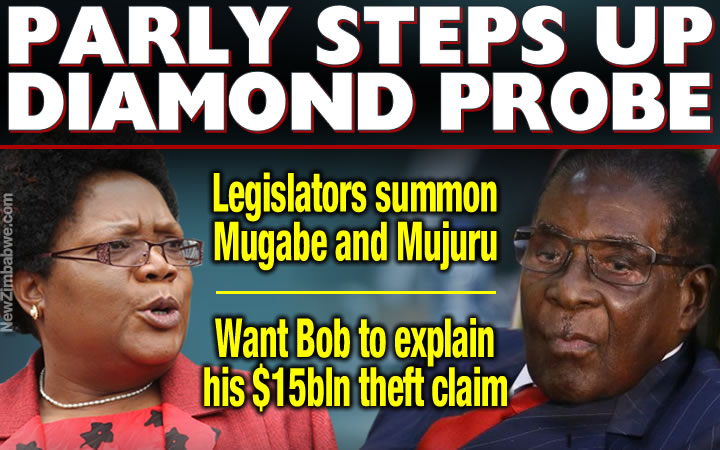 FORMER President Robert Mugabe will next month finally show up for grilling by Parliament’s Mines and Mining Committee, which has pulled all the stops recently to get to the bottom of a complex diamond scandal involving gems from Marange in Manicaland.

This was a resolution by the Temba Mliswa-led committee on Thursday which slated the meeting for 9 May.

Mugabe claimed back in 2015 that up to US$15 billion worth of diamonds might have been stolen from Marange, adding that only about US$2 billion could have flowed into the national purse.

The legislative committee has also summoned former Vice President Joice Mujuru to give her own side of the story about the same matter.

“We have resolved that former President Mugabe comes with Mai Mujuru,” Mliswa said, insisting that Mugabe was once CEO of the country and presided over far-reaching cabinet decisions over diamonds.

Pursuit of the diamond saga by Mliswa’s committee has generated a lot of interest among citizens who have seen ex-government ministers who were once untouchable all summoned for grilling.

During the controversial diamond mining period, the country’s Central Intelligence Organisation, Police and Defence were all granted mining rights by government, in violation of national laws which forbid State institutions from engaging in commercial operations.

The government later decreed the disbandment of all diamond firms mining for the gem in Marange and ordered them to merge into a single mining concern under its control.

Since the parliamentary inquiry started, the committee has since been able to hear submissions from the CIO and the police with Defence on Thursday also presenting its own side of the story.

Mliswa told NewZimbabwe.com that his committee will leave no stone unturned in its quest to find the truth in the diamond scam.

“How can you discipline a school teacher without asking the headmaster what went wrong. It’s proper governance. The constitution is very clear; the former President can be called to account.

“These are issues of accountability. It’s not a secret that diamonds were plundered and there is an inquiry. He (Mugabe) is the one who spoke about the $15 billion; so is it not improper when there is an inquiry on what that was about.”

Mugabe’s summoning ends weeks of speculation on whether the ex-leader will ever be summoned to reveal what he knew about the massive gem plunder.

When he was President, Mugabe continuously ignored calls by MPs to come and respond to questions on governance decisions under his regime.

The prospective May hearing will be the first ever public appearance by a leader who has kept a low profile since his shock ouster November last year.

Mliswa said Mujuru, as then VP, was part of cabinet decisions to award these tenders and mining concerns to the security sector and private firms.

He also said Mugabe had no leeway to decline the invitation saying the resolution to summon him was enough.