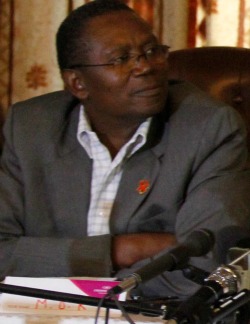 OPPOSITION leaders have called on the government to re-engage Zimbabweans living outside the country as efforts continue to find solutions to the country’s faltering economy.
The leaders were speaking at a public forum in Harare organized by Sapes Trust under the theme ‘Zimbabwe Going Forward; Consolidating the democratization Processes and Re-enforcing Re-engagement with the Global Community’.
Calls for national re-engagement come at a time Zimbabwe is battling a mounting economic problems although the government remains confident that its ZimAsset economic blueprint will begin soon show positive results.
Former Finance Minister and leader of the MDC-T Renewal Team, Tendai Biti however, said the policy had no chance of succeeding and called for new dialogue to come up with a better programme.
“ZimAsset is not an economic blue print; it’s a political statement. There is need for the government to re-engage with everyone including the Diaspora,’’ he said.
Mavambo leader Simba Makoni, also a former treasury chief, agreed with Biti and insisted that any new national re-engagement would not be possible without Zimbabweans outside the country.
“National re-engagement will not be possible without engaging Zimbabweans outside the country,” he said Makoni adding the exiles should however, not wait to be invited but demand to be part of the process.
With over three million Zimbabweans living outside the country, according to the United Nations Development report (2010), analysts say this demographic could help drive economic growth if the government comes up with the right strategies to harness what many consider an important resource.
According to Simon Nhongo, an independent development management consultant who was part of the panel, the Diaspora can contribute immensely to the economic development of any country.
“Strategically managed and harnessed, the Diaspora can be a very powerful tool in the country’s economic advancement. Currently the Zimbabwe Diaspora contributes about 7% of the Gross Domestic Product (GDP),” he said.
The ruling Zanu PF has not sought to reach out to the Diaspora in an organized in way, considering the majority of them a captive constituency for the opposition.
But the opposition’s abysmal performance in national elections worsened by power struggles that threaten to break up parties such as the MDC-T have seen many in the Diaspora conclude they have no chance of toppling President Robert Mugabe.Advertisement

Zanu PF, for its part, appears aware of the mood swing.
“Now that the Diaspora have lost their political home with the crisis in the MDC-T, I urge my colleagues in Zanu PF to vigorously campaign for the Diaspora vote,’ said Deputy Minister of Foreign Affairs Chris Mutsvangwa.
Speaking in Bulawayo early this year, Information Minister Jonathan Moyo also said the government was “definitely” committed to Diaspora engagement.
“We didn’t have this notion of Diaspora as a positive thing. We took the position that these asylum seekers are running away and embarrassing their country,” Moyo told the Bulawayo Press Club.
“But these guys now constitute a whole critical strategic population called Zimbabweans in the Diaspora with experience, and some with resources. The most important experience they have is the knowledge advantage and it’s rooted in the education they got here.
“We now a challenge to come up with incentives, serious incentives, to attract them to come back home because this is what will determine, define success in this phase of our country’s development.”