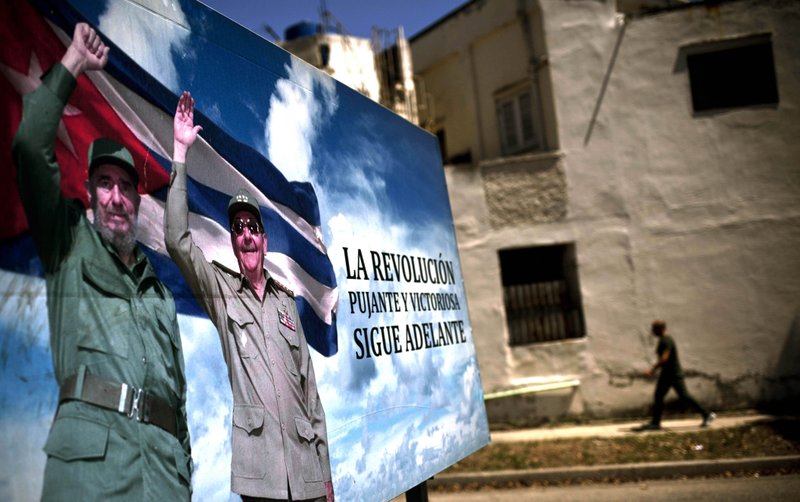 HAVANA: A 57-year-old bureaucrat replaced Raul Castro as the president of Cuba on Thursday, launching a new political era as a government led by a single family for six decades tries to ensure the long-term survival of one of the world’s last communist states.

The National Assembly announced that Miguel Mario Diaz-Canel Bermudez had been approved as the sole candidate for president.

The 86-year-old Castro will remain head of the Communist Party, which is designated by the constitution as “the superior guiding force of society and the state.” As a result, he will still be the most powerful person in Cuba for the time being.

His departure from the presidency is nonetheless a symbolically charged moment for a country that has been under the absolute rule of one family since the revolution — first by revolutionary leader Fidel Castro and, for the last decade, his younger brother.

Facing biological reality but still active and apparently healthy, Raul Castro is stepping down as president in an effort to guarantee that new leaders can maintain the government’s grip on power in the face of economic stagnation, an aging population and increasing disenchantment among younger generations.

“I like sticking with the ideas of President Fidel Castro because he did a lot for the people of Cuba, but we need rejuvenation, above all in the economy,” said Melissa Mederos, a 21-year-old schoolteacher. “Diaz-Canel needs to work hard on the economy, because people need to live a little better.”

Most Cubans know their first vice president as an uncharismatic figure who until recently maintained a public profile so low it was virtually nonexistent. That image changed slightly this year as state media placed an increasing spotlight on Diaz-Canel’s public appearances, including remarks to the press last month that included his promise to make Cuba’s government more responsive to its people.

“We’re building a relationship between the government and the people here,” he said then after casting a ballot for members of the National Assembly. “The lives of those who will be elected have to be focused on relating to the people, listening to the people, investigating their problems and encouraging debate.”

Diaz-Canel gained prominence in central Villa Clara province as the top Communist Party official, a post equivalent to governor. People there describe him as a hard-working, modest-living technocrat dedicated to improving public services. He became higher education minister in 2009 before moving into the vice presidency.

In a video of a Communist Party meeting that inexplicably leaked to the public last year, Diaz-Canel expressed a series of orthodox positions that included somberly pledging to shutter some independent media and labeling some European embassies as outposts of foreign subversion.

But he has also defended academics and bloggers who became targets of hardliners, leading some to describe him a potential advocate for greater openness in a system intolerant of virtually any criticism or dissent. International observers and Cubans alike will be scrutinizing every move he makes after he officially takes office on Thursday.

Two years after taking over from his ailing brother in 2006, Castro launched a series of reforms that expanded Cuba’s private sector to nearly 600,000 people and allowed citizens greater freedom to travel and access to information. He has failed to fix the generally unproductive and highly subsidized state-run businesses that, along with a Soviet-model bureaucracy, employ three of every four Cubans. State salaries average $30 a month, leaving workers struggling to feed their families, and often dependent on corruption or remittances from relatives overseas.

Castro’s moves to open the economy have largely been frozen or reversed as soon as they began to generate conspicuous shows of wealth by the new entrepreneurial class in a country officially dedicated to equality among its citizens.

“I don’t want to see a capitalist system, hopefully that doesn’t come here, but we have to fix the economy,” said Roberto Sanchez, a 41-year-old construction worker. “I’d like to have more opportunity, to buy a car, and have a few possessions.”

As in Cuba’s legislative elections, all of the leaders selected Wednesday were picked by a government-appointed commission. Ballots offer only the option of approval or disapproval and candidates generally receive more than 95 percent of the votes in their favor.

The Candidacy Commission also nominated another six vice presidents of the Council of State, Cuba’s highest government body. Only one, 85-year-old Ramiro Valdez, was among the revolutionaries who fought with the Castros in the late 1950s in the eastern Sierra Maestra mountains.

State media went into overdrive Wednesday with a single message: Cuba’s system is continuing in the face of change. Commentators on state television and online offered lengthy explanations of why Cuba’s single-party politics and socialist economy are superior to multi-party democracy and free markets, and assured Cubans that no fundamental changes were occurring, despite some new faces at the top.

“It falls on our generation to give continuity to the revolutionary process,” said assembly member Jorge Luis Torres, a municipal councilman from central Artemisa province who appeared to be in his 40s. “We’re a generation born after the revolution, whose responsibility is driving the destiny of the nation.”