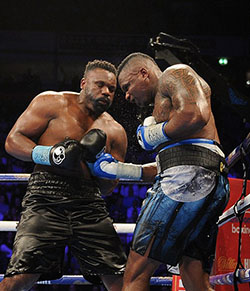 UK: Dillian Whyte won a thrilling grudge match against fellow British heavyweight Dereck Chisora on a split decision in Manchester.
In an incredible fight, both men looked in trouble at various points, with the fighters trading blows until the last.
One judge gave it to Chisora by 115-114, but the other two judges scored it 115-113 and 115-114 in Whyte’s favour.
This fight was an eliminator for the WBC world heavyweight title, held by American Deontay Wilder.
Whyte was supposed to defend his Lonsdale Belt against Chisora, but the British Boxing Board of Control revoked the fight’s title status after an ill-tempered build-up culminated in Chisora throwing a table during a news conference.
Chisora was also fined £25,000, ordered to pay £5,000 in costs and given a two-year suspended ban from boxing after the incident.

Whyte, 28, gave a good account of himself before being knocked out by Joshua last year and was widely fancied to defeat his fellow Londoner.
The 32-year-old Chisora, a former world title challenger, landed with some heavy body shots in the early stages and often had his rival on the back foot.
The fight took off in the fifth round, during which Chisora had Whyte wobbling with a huge overhand right but was unable to finish the job.
Having poured so much into the previous round, Chisora came out for the sixth looking weary, retreating to the corner and allowing Whyte to attack him.
Chisora came back strongly and there was a furious exchange at the end of the seventh, before the sworn enemies exchanged a wry look on the bell.
It was more of the same at the end of the eighth, Chisora landing with a huge left hook that left Whyte covering up on the ropes, before Whyte eventually extricated himself.
By the end of the ninth, both men looked exhausted and ready to drop, but that did not stop them exchanging more damaging blows in the 10th, with Chisora’s punches appearing to have the greater effect.

Both men touched gloves before the start of the 12th and final round, which suggested they had hammered some respect into each other.Advertisement

Chisora was staggered by a juddering right hand halfway through a wild final round, during which both men somehow managed to stave off a knockdown.
‘What a contest’ – analysis
BBC Sport boxing expert Richie Woodhall: “I don’t think you’ll see a better heavyweight 12-round contest anywhere in the world.
“If the main event didn’t happen tonight I don’t think anyone would be disappointed because what we have just witnessed was as good as it’s going to get.”
WBC cruiserweight champion and BBC commentator Tony Bellew: “That has taken me back to the Ali days, the Frazier days. I’ve not seen a heavyweight fight like that for 20 years. What a contest!”