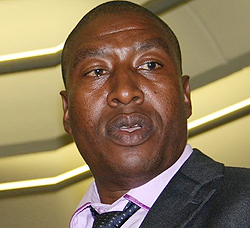 MUTARE: The Zimbabwe Consolidated Diamond Company (ZCDC) which was ordered to immediately stop operations by High Court until it attains a proper certificate is operating illegally and should be disbanded, says Centre for Natural Resources Governance (CNRG).
High Court on Tuesday ordered ZCDC to halt operations in Marange until it attains an Environmental Impact Assessment certificate from the Environmental Management Agency.
This was after the Marange Development Trust (MDT), with help of Zimbabwe Environmental Law Association (ZELA), filed an interdict for the company to stop mining until it complied with the law.
In a case heard in Harare, MDT was the applicant with ZCDC as the first respondent and the Environmental Management Agency the second respondent.
In terms of section 97 of the Environmental Management Act, as read with the First Schedule of the Act, all mining activities cannot commence without the issuance of an approved certificate.
Justice David Mangota ordered ZCDC to desist from conducting any mining operations until it had conducted an environmental impact assessment process in accordance with the law and obtained a certificate.
CNRG Director, Farai Maguwu, said ZCDC is a shadowy company that was illegally registered and should be disbanded until a new company was formed through an Act of Parliament.
“They can easily obtain an EIA and continue looting. To me the real issue is to deal with the basics. Who is ZCDC? Last time I checked it was illegally registered and even parliament was not too sure who are the actual people behind ZCDC,” said Maguwu.
“It must be disbanded and a new company lawfully formed through an Act of Parliament put in place,” said Maguwu.
ZCDC had argued in its notice of opposition papers that it should be allowed to continue mining operations pending the approval of the EIA report submitted to EMA in 2016.
MDT trustee and director, Malvern Mudiwa, said the decision to take legal action was reached during a board meeting held on January 8 this year.
MDT which comprises of Marange villagers is a registered Trust that was created to promote development in Marange District and fight against unfair practices by companies in mining areas, practices that undermine the livelihood of locals.Advertisement