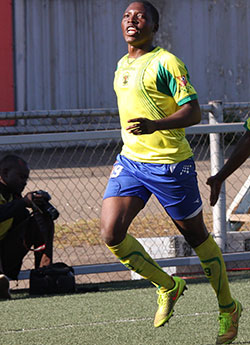 Harare City 2-1 Chiredzi FC
MASIMBA Dinyero started his three match test at Harare City with a hard fought 2-1 win over basement club Chiredzi at Rufaro Stadium on Friday.
City fell behind in the ninth minute when Scholar Hadebe headed home from the right before Osbourne Mukuradare sliced home with his head eight minutes before the breather.
The comeback was complete when Francisco Zekumbawire weaved his way past Maketo Sengu on the right, charged into the box and set up James Jam who obliged with a first time shot in the 57th minute-a goal that prove to be the winner for City.
Dinyero was given three matches to prove himself after City fired Bigboy Mawiwi on Tuesday. Word has it that Moses Chunga, who was fired by Chiredzi, is being earmarked for the City job was not helped by his presence at Friday’s match at Rufaro.

With the win, City moved into 12th place with 18 points, one point above the drop zone, with four teams set to be relegated at the end of the season.
Gishon Ntini was in charge of Chiredzi for only the second match after winning last week and was disappointed with the chances not converted.
“We played well, created chances but we could not score. If you don’t score you lose and we have to go back and work on that for the next home match.”
FIXTURES
Saturday: ZPC Kariba vs Hwange (Gwanzura Stadium1500hrs SS), FC Platinum vs Chapungu FC (Mandava Stadium)
Sunday: Caps United vs Chicken Inn (NSS, 1500hrs SS), Buffaloes vs Shabanie Mine (Sakubva Stadium), Highlanders vs How Mine (B/F), Black Rhinos vs Dynamos (Rimuka Stadium) ,Triangle United vs Bantu Rovers (Gibbo Stadium).