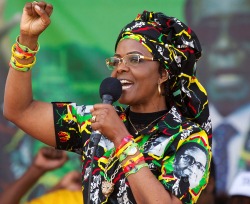 Lloyd Msipa wrote an article entitled: Grace Mugabe and diplomatic immunity; which appeared recently on this forum.
In that article, he correctly pointed out the legal basis for the grant of diplomatic immunity, being of course: the 1961 Vienna Convention on Diplomatic Relations (hereinafter referred to as the Convention).
However it appears he forgot to tell us that diplomatic immunity is not etched in stone. Without making this a personal discussion about the First Lady of Zimbabwe, I wish to point out the general parameters under which diplomatic immunity operates.
Mr Msipa appears to paint a picture that the South African authorities had no room for manoeuvre given the operational provisions of Convention.
The following articles of the Convention are some of the pertinent to the discussion that follows.
Article 31 provides that: [1].A diplomatic agent shall enjoy immunity from the criminal jurisdiction of the receiving State.He shall also enjoy immunity from its civil and administrative jurisdiction, (and gives exceptions not relevant here.),[4].The immunity of a diplomatic agent from the jurisdiction of the receiving State does not exempt him from the jurisdiction of the sending State.
Article 41 that provides that: [1].Without prejudice to their privileges and immunities, it is the duty of all persons enjoying such privileges and immunities to respect the laws and regulations of the receiving State. They also have a duty not to interfere in the internal affairs of that State.
I will argue that, far from the picture painted by Mr Msipa, there are a number of options that the South African authorities could have invoked but still remained in compliance with the provisions of the Convention.
Firstly the convention covers diplomats in course of executing their duties as diplomats. Take this example: if diplomats fight during a meeting at a SADC Conference following some heated argument over divergent views, they cannot be subjected to the criminal jurisdiction of the host country.
However if a diplomat after the conference goes for a beer drink in a public place and is involved in a fist fight he may be arrested for assault. The difference being that in the latter instance he was no longer engaged in diplomatic work. These officials are covered only for crimes committed within the scope of their regular work responsibilities.Advertisement

So this same scenario ought to be considered when deciding whether one should be granted diplomatic immunity or not. The crucial question being whether the alleged crime was committed when the diplomat was engaged in diplomatic work or he /she was on a frolic of his/her own. I will not answer that in respect of the specific case that Mr Msipa dealt but will let him and the readers ponder over that. However I will try to explain why the South African authorities acted in the manner they did.
The reason is simple. Under customary international law the golden rule is: Treat other diplomats as you would like yours to be treated. Hence South Africa being a close neighbour with Zimbabwe and given the historical links it was only expected that they would accede to Zimbabwe’s request for diplomatic immunity in this case as they would want their diplomats to be treated in the same manner.
So if a South African diplomat were to engage in any criminal activity, including a possible assault of a Zimbabwean citizen, the expectation is that he/she will be granted diplomatic immunity by the Zimbabwean authorities.
Secondly whilst a diplomat may retain his/her diplomatic immunity, he/she could be declared persona non grata (undesirable person in the host country) PNG. The result is that the diplomat is allowed to return to his/her host country but is not allowed to return to the host country in the future.
So taking Mr Msipa’s example, the Zimbabwean diplomat would retain her diplomatic immunity but would not be allowed to enter South Africa in the future. This is covered by Article 9, Section 1 of the Convention:
“The receiving State may at any time and without having to explain its decision, notify the sending State that the head of the mission or any member of the diplomatic staff of the mission is persona non grata or that any other member of the staff of the mission is not acceptable. In any such case, the sending State shall, as appropriate, either recall the person concerned or terminate his functions with the mission. A person may be declared non grata or not acceptable before arriving in the territory of the receiving State.”
These drastic steps have been taken in the recent past; for example, when the former USA President Obama declared a number of Russian diplomatic agents PNG.
I have argued that contrary to Mr Msipa’s submission that a diplomat who commits an offence in a host country cannot be arrested this in fact is not entirely accurate.
The position is that a diplomat who commits an offence whilst outside the course of executing his/her diplomatic duties in the host country can be subjected to the criminal jurisdiction of that country.
Further Mr Msipa did not mention that there are limits to diplomatic immunity as Diplomats cannot go around for example shooting people without consequences. The host country has the right to declare someone a persona non grata and to send that person home for any reason.
Further the sending state can also waive diplomatic immunity so that the offending diplomat can be subjected to the criminal jurisdiction of the receiving state. The official’s home country can also try that person at a local court. I am however not certain to what extent this last option could be translated into a reality in the scenario Mr Msipa dealt with.
However what appears certain is that the matters he dealt with are not yet water under the drain as there is a threat of instituting judicial review in South Africa. The grounds for review are that the decision to grant diplomatic immunity by the Minister responsible was irrational.
So what does it mean for the Zimbabwean diplomat? What it means is that if the South African court makes a finding that the decision to grant immunity was irrational the affected Zimbabwean diplomat will either have to voluntarily surrender to the criminal jurisdiction of South Africa or risk arrest and prosecution next time she is in South Africa.
This is what it would mean legally but that does not mean that it will happen that way in practice as sometimes political decisions override legal considerations.
So the crucial questions to answer are the following:

I would submit therefore that the decision as to whether or not to grant diplomatic immunity is not only the outcome of legal considerations under customary international law or the provisions of the Vienna Convention on Diplomatic Relations but also a highly political one.
It is normally such political considerations that attracts and are subjected to judicial review.
George Tizirai-Chapwanya, BL (Hons) LLB LLM is a Solicitor with CB Solicitors. He can be contacted on gtc@cbsolicitors.co.uk; or visit CB Solicitors’ website at www.cbsolicitors.co.uk; Mobile: 07950529478
Disclaimer: This article only provides general information on immigration law. It is not intended to replace the advice or services of a Solicitor. The specific facts that apply to your matter may make the outcome different than would be anticipated by you. The writer will not accept any liability for any claims or inconvenience as a result of use of this information.